Messi or Cristiano this year? 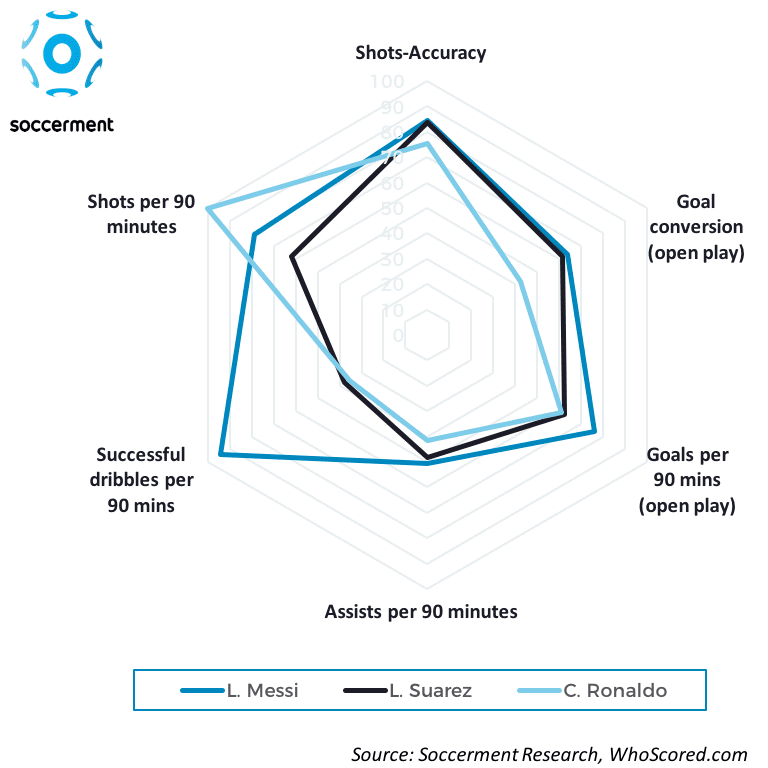 Among the top five European leagues, the topscorer table of Spanish La Liga (SLL) is among the most predictable, at least for the first positions. Lionel Messi and Cristiano Ronaldo simply seem too much for their rivals: in the last eight editions of the Trofeo Pichichi (awarded by the sports newspaper Marca to the top goalscorer of SLL) they have shared the award almost equally (four times Messi and three times C. Ronaldo). The exception to the rule was Luis Suárez in 2015/16, the only “outsider” to win the topscorer award since the 2008/09 season.

Going into the details of the duo domain, Messi is currently the SLL all-time topscorer with 351 goal in 384 appearances (0.91 goals per match). C. Ronaldo is second with 285 goals, but in 265 appearances, showing a better goals-per-match ratio (1.08). Basically, having one of the two guarantees more than one goal every match. The following chart provides a snapshot of Messi’s and C. Ronaldo’s goals per match in SLL, over the past eight seasons. In 2011/12 Messi recorded the highest number of goals ever scored in one SLL season: 50. Impressive. 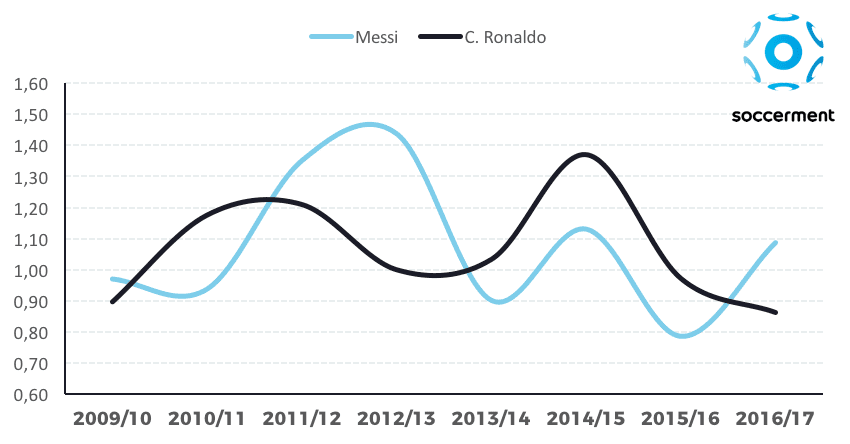 Suarez could benefit from Dembélé’s assists

The only forward who could maybe break their domain seems again Luis Suarez, who in the last two seasons was capable of netting 69 goals. The Uruguayan leads this two-years topscorer table in front of Lionel Messi with 63 goals and C. Ronaldo with 60 goals. Suarez, who missed the first two SLL matches, is now back from his injury. As we stated in a previous post, the replacement of Neymar with Dembélé could support the scoring attitude of both Messi and Suarez: last year in Bundesliga, Dembèlè recorded 12 assists in 2,042 minutes played.

Griezmann and Benzema seem to be one step behind 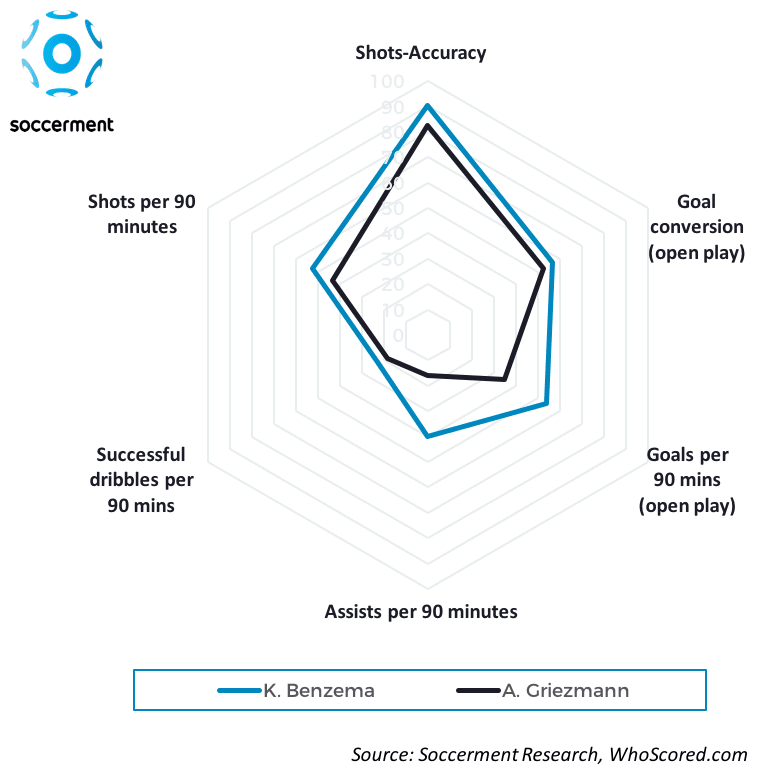 When we talk about great goalscorers, we have to mention the likes of A. Griezmann and K. Benzema, who would likely fight to lead the topscorer table in any other league. But being in the same tournament of Messi, Ronaldo and Suarez, inevitably puts a theoretical cap on the position they could achieve.

Griezmann has been the leader of Simeone’s Atletico Madrid in the last 3 seasons with a respectable amount of 60 goals. In the season 2016/17 Atletico Madrid totalled 249 shots in the penalty area and Griezmann took 16% of those (40 shots). At the end of the season, his final score will certainly be helped by his high involvement.

In the season 2016/17, Karim Benzema contributed only to 12.2% of Real Madrid’s total shots in the penalty area. The cumbersome presence of C. Ronaldo seems to be the main reason of this lower contribution, as it is somewhat difficult to cohabit with a player that records 6.7 shots P90. In any case, we believe that Benzema could improve last year performance of 11 goals, and being closer to the 2015/16 season, when he was capable of scoring 24 goals (attacking contribution in the penalty area of almost 20.0%).

Our shortlist of possible surprises

Behind those five top players, we have shortlisted a few players who could be able to reach 15 – 20 goals and be the new SLL revelation. The hard part is being right at the very beginning of the season, with little clues. That is exactly what we are trying to accomplish at Soccerment .

Our shortlist does not include Athletic Bilbao’s striker Arduriz and Celta Vigo’s Iago Aspas, even if they both surpassed the 15-goal level last season. 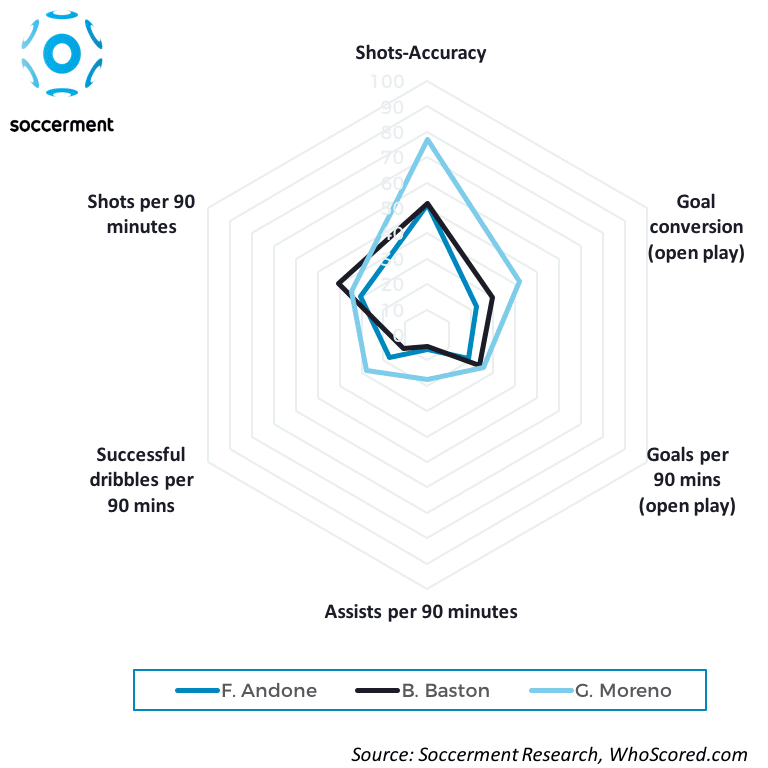 Chart 4: Andone vs Baston vs Moreno

Instead, we shortlist players like Gerard Moreno, Florin Andone and Borja Bastón, who could step up as potential breakthroughs.

Gerard Moreno is a 25-year-old striker playing for RCD Espanyol. In 2016/17 he recorded his best season yet, netting 13 goals in 37 appearances (accumulating 2.25 shots P90). Of his 82 shots last year, almost 70% came from the penalty box area, a very positive feature (higher probability of scoring), which should help Gerard Moreno to improve his goal-record.

Florin Andone is probably not such a mainstream name but, in our radars, his past performances have not passed unnoticed. Andone, 24, is the youngest of our trio of potential surprises. The current season will be his second with Deportivo La Coruna. In 2016/17 he recorded 12 goals in 37 appearances, accumulating 2.05 shots P90. His shot contribution mostly came from the penalty box area (1.61 P90), which demonstrates Andone’s attitude to shoot quite close to the goalpost. During the last day of the summer transfer market, Brighton offered £17.8m to Deportivo for the Romanian striker. However, mainly due to Andone’s contract clause (Deportivo only owns 70% of his economic rights, with Cordoba owning the rest), the parties did not find an agreement. Certainly, the Seagulls have seen a lot of potential in the Romanian striker. This season could prove they were right.

Borja Bastón is a 25-year-old striker currently playing for Málaga, on loan from Swansea City. Swansea bought him at the beginning of the 2015/16 season from Eibar, on a four-year contract for a club record fee of £15.5 million. His performance last year was quite disappointing though: he accumulated only 526 minutes on the pitch and scored only once. Our confidence in his potential stems from his 2015/16 season with Eibar. He finished the season with 18 goals, without any penalty. More importantly, Borja Bastón contributed to 42% of Eibar’s goals and his number of shots in the penalty area represented 28% of his team. We believe that, in a similar environment such as Málaga (battling to avoid relegation), Borja Bastón could prove again to be a reliable striker.

For comments, suggestions and requests, please send us an email: research@soccerment.com.