It is not easy to put together, in a single football player, all the qualities of O’Ney: fast, skilled and a dribbling star, thus able to pass through opponents with ease, creating scoring occasions for himself and (especially) for his teammates. Last season Neymar successfully dribbled 5.7 times every 90 minutes. As a comparison, Lionel Messi successfully dribbled “only” 3.8 times every 90 mins.

After a dribble, Neymar tends to create chances for his teammates, through key passes, where O’Ney topped our tables with 3.05 every 90 mins. Unsurprisingly, last year his assists amounted to a grand total of 19, of which 8 in UCL (top-spot) and 11 in the league (he came third).

The flipside of the coin is that Neymar has yet to find continuity at shooting attempts: his number of shots in open play (2.66 every 90 mins) was below both Messi and Suarez: 3.46 and 2.84 respectively. To put things in perspective, C. Ronaldo tops the table at 4.12. Last year Neymar scored 17 times, between La Liga (13) and UCL (4). However, his initial performances in the French Ligue 1 (FL1) are clearly encouraging: 6 shots in open play per game and 3 goals in two matches.

Coutinho as the first option? For the imminent future, it seems sensible

Of the same age and nationality of Neymar, Coutinho is indicated by many in the media as the natural replacement for O’Ney. We believe this makes sense, especially if Barça needed someone ready for the task from day 1: positive aspects about Coutinho are his international experience (34 apps between EL and UCL with Liverpool and Inter Milan) and his “influential area”, very similar to Neymar. As a right footed player (like Neymar) Coutinho can cut in from wide area when in possession and to receive ball between half spaces during the build-up phase.

Coutinho belongs to that category of few players capable of accomplish more than 2.5 dribbles per 90’s minutes (2.85), during the 2016/17 season. This is one of the best quality a player may have in Barcelona’s playing system, especially in those games where the Blaugrana face deep defensive teams which congest the last 25 meters, reducing the free available space. Although the rate at which Neymar used to dribble seems unattainable (5.69), having at your disposal a player like Coutinho can represent a powerful weapon to disrupt opposition lines. 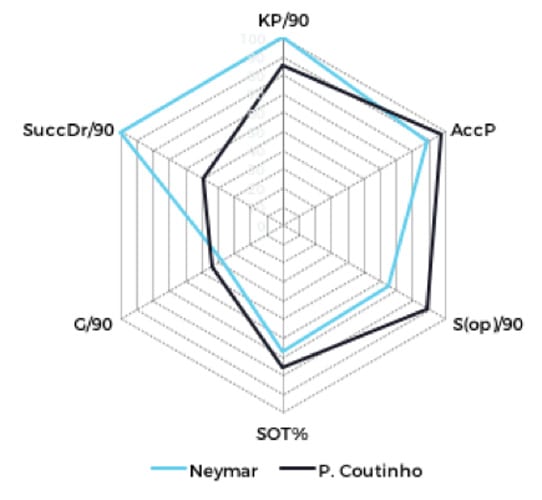 Key passes are another area where Neymar has been brilliant (3.05 every 90 minutes) and where Coutinho’s performance looks good, although – as we detail later – to a lesser extent than Dembélé’s. In last year’s English Premier League (‘EPL’), Coutinho finalised 7 assists (ranking 12th in the EPL table).

Regarding shots, Coutinho’s contribution would be different from Neymar’s. Coutinho tends to shoot more from open play situation (3.65), especially outside the penalty area. Instead, Neymar normally shoots less (2.66). Despite having a better non-penalty goal rate than Neymar (0.52 vs. 0.44), Coutinho’s figure is inflated by the high number of shots taken; in a system where long spell of possession and shots inside the penalty area have always been the tradition, Coutinho’s shooting impatience might prove problematic.

For the benefit of the ones who do not know him, Ousmane Dembélé is a French player and one of the best emerging talents in Europe. Dembélé, 20 years old, last season played for Borussia Dortmund. It was his second year as a senior player, after having debuted with Stade Rennais FC (Ligue 1). Despite the young age, he already made almost 80 appearances in two seasons.

When we built our spider charts and compared Neymar and Dembelé, we were impressed by their similarities. As shown in chart 2 below, Dembélé resembles a sort of mini-Neymar! Basically, a younger O’Ney. At the moment, Dembélé does not overcome Neymar in any of the KPIs taken in consideration in our analysis but, considering his young age, Barcellona could hope for a fast catch-up and, consequently, a brilliant future.

The first key stat that makes Dembélé so attractive is the number of successful dribbles. Last season he completed 4.2 dribbles every 90 minutes. The same goes with key passes. Out of the panel of players we take into consideration, only Neymar last season performed better than the Frenchman: Dembélé made almost 2.7 key passes every 90 minutes, thus creating a great amount of opportunities accompanied by 0.58 assists every 90 minutes, the best in our data sample. He came second in the Bundesliga for number of assists: 12. 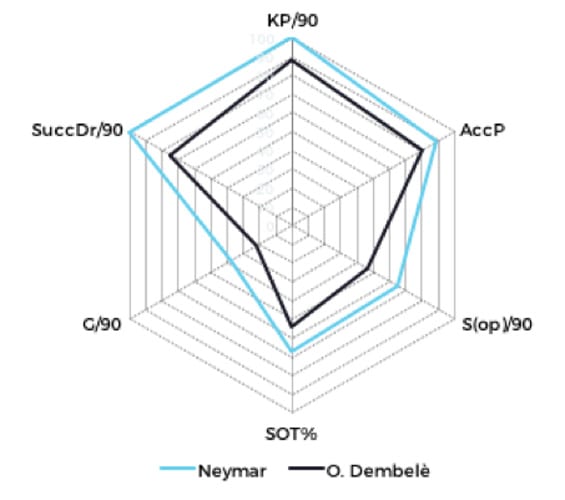 Unlike Coutinho, his shooting and goal conversion were not that impressive last year. In our sample, Dembélé is the player with the lowest number of shots in open play (1.9) and the lowest amount of goal per 90 minutes (0.26). However, this makes sense to us. As said, Dembélé is a very similar player to Neymar: they both make their talent available to their teammates rather than to themselves and – we believe – Messi and Suarez would be happy about that.

In the chart below, we compare Dembélé’s 2016/17 performance (@ Dortmund) versus the previous year, when he was playing for Rennes in FL1. Dembélé showed remarkable improvements in his passing ability, with the number of key passes per 90 minutes increasing by 35% yoy. On the other hand, in the Bundesliga, despite being one year more mature, Dembélé struggled to keep the pace with the previous season’s scoring rate: at Rennes he scored c.0.6 times every 90 minutes (highlighting his propensity for scoring), whilst last season season he stopped at c.0.3.