Unlike many, we do not consider Marco Verratti as the natural heir of Andrea Pirlo, as their stats highlight a very different playing style. Whilst Pirlo is a long-ball master (12.6 per 90 mins, 81.2% accuracy) and produces more key passes (2.6 P90), Verratti is a very skilful dribbler (1.8 P90) and has better defensive qualities. Regarding their scoring attitude, Pirlo’s “La Maledetta” makes the difference. 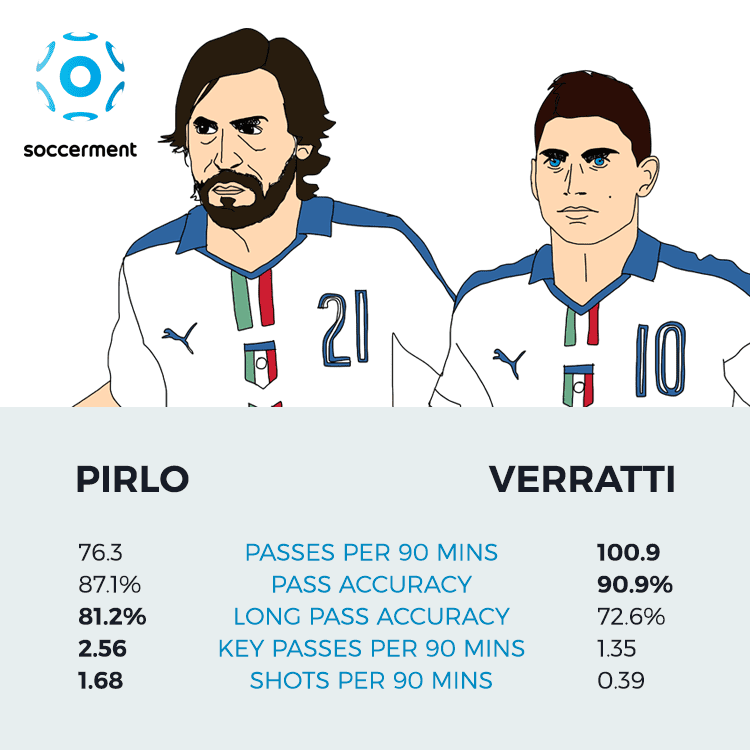 How many “New Pirlo” out there?

Like many before him and many other afterwards, Verratti has been dubbed by many as “the new Pirlo”. We believe that is mainly due to the fact he shares his same nationality and, roughly speaking, the same position on the pitch.

We analyzed and compared their performance stats. In order to do that, we had to take different timeframes. In the case of Pirlo, we considered his (pre-MLS) data between 2009 and 2015, while for Verratti, all the data since 2012.

Clearly, we are looking into different phases of their respective careers, as Pirlo was 30-35 in the period of analysis, while Verratti, who is now 24, was still a teenager in 2012. However, we believe the analysis offers some interesting insights and unveils precious details, often overlooked by the media and the public.

Let’s start where Verratti and Pirlo differ the most: their goal-scoring attitude. This begins with the number of shots they take, with Pirlo taking 1.7 shots every 90 mins and Verratti only 0.4.

Pirlo is indeed well known for his “La Maledetta” free-kick. In the following extract (from his book “I Think Therefore I Play”), he describes the “eureka moment”, when he realized how to shoot the “perfect dead-ball“, taking inspiration from Lyon’s former Brazilian midfielder Juninho Pernambucano: “In essence, the ball needs to be struck from underneath using your first three toes. You have to keep your foot as straight as possible and then relax it in one fell swoop. That way, the ball doesn’t spin in the air, but does drop rapidly towards the goal. That’s when it starts to rotate. And that, in a nutshell, is my maledetta“.

In the case of Verratti, free-kicks represented only 11 out of 54 shots (20%). At PSG, with Cavani and Neymar fighting over set pieces, finding some room for improving these stats looks difficult at best. 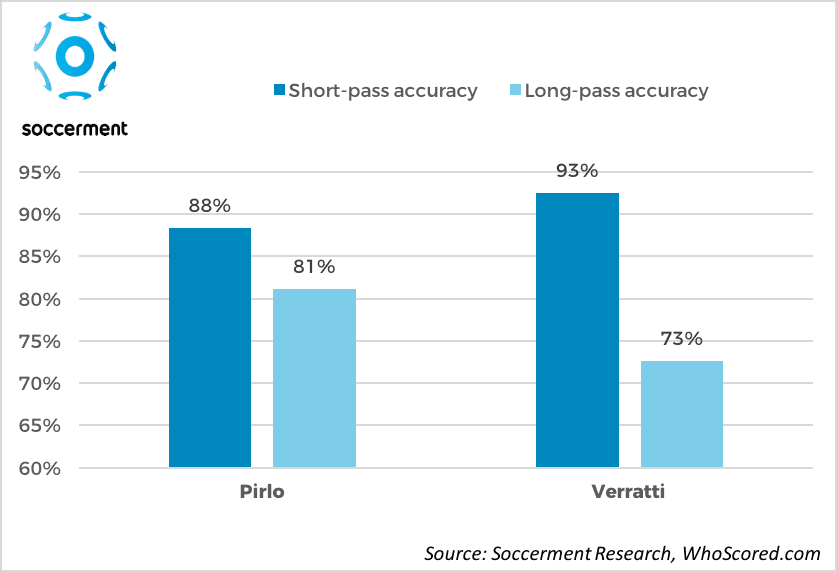 The second and, probably, most important finding has to do with the diversity of their passing styles.

For Verratti, the great majority of passes (92%) consist of short balls (<25 yards, or 23 meters), while Pirlo is among the players in our database to try the long balls most often (17% of total passes).

One of the reasons Verratti prefers short passes must be the higher level of confidence: his pass accuracy varies a lot, from 92.6% on short passes down to 72.6% for long balls. Pirlo is, instead, more confident to try long balls, with 81.2% of them being accurate. In our database, the player having the highest accuracy on long balls is the ex Barcelona player Xavi (89.5%, from 2009 to 2015).

Defensive skills and one-to-ones: Verratti among the best

Verratti is definitely more active than Pirlo when it comes to defending, as highlighted by their stats. He successfully tackles 3.5 times per 90 minutes, compared to less than 2 times for Pirlo.

Simply put, Verratti is really good at one-to-ones, as also shown by the stats regarding his number of dribbles: he successfully dribbles 1.8 times every 90 minutes (doubling Pirlo), with a

Where they both score poorly is the number of aerials won per match: both players are at around 0.3 per 90 minutes (vs 0.9 average of our basket of top midfielders). It needs to be highlighted, however, that Pirlo is 12cm taller than Verratti (who is 165cm tall), which underlines again how combative Marco Verratti is on the pitch.

Pirlo and Verratti together on the pitch: a brief experience

In the Italian national team, Pirlo and Verratti have played together for just 264 minutes, between June 2014 and September 2015 (Pirlo’s last match with Italy). The most notable highlights relates to the 2014 Fifa World Cup in Brazil. They contemporaneously played for 132 minutes, against England (Italy won 2-1) and Uruguay (Italy lost 0-1).

Interestingly, in those two matches, Pirlo made more passes per 90 minutes compared to Verratti (91.0 vs 70.9).

This might have had to do with three factors. First of all, Pirlo was undoubtedly Italy’s “metronome” and the midfield leader. Secondly, Verratti was 21 year-old back then, a promising but not yet affirmed playmaker. Thirdly, Verratti did not play in his typical position, but somewhat more advanced. Against England, it was De Rossi who played in front of the defense. Against Uruguay, Italy played with a line of five midfielders with Pirlo in the middle. 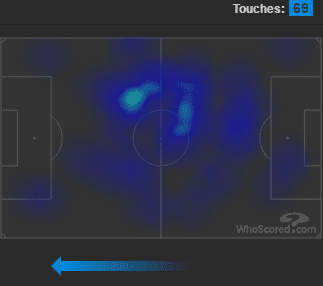 The long-term shooting stats of the two players were confirmed during the two games. Pirlo shot 4 times in total (of which one woodwork vs England), while Verratti did not take any shot.

In the heatmaps here, we display the areas where Pirlo and Verratti touched the ball most often against England in the 2014 World Cup group match (14th June).

Pirlo was playing on the centre-left of Italy’s midfield, while Verrati on the centre-right, not their usual position, occupied by De Rossi on that occasion.

Italy did not do well at the 2014 World Cup, not going through the group stages. Verratti and Pirlo played together once more, on 3rd Sep 2015 in Italy-Malta (1-0), which also marked Pirlo’s last match for the national team.