A free-kick specialist, Leicester’s James Maddison (22) is doing more than well in his first Premier League season: to date, he has scored 6 goals and completed 6 assists in 30 appearances. He defines himself as a “10”, putting chance creation at the very centre of his playing agenda. Time and some more EPL experience could however shape him into a more versatile playmaker, in our view. 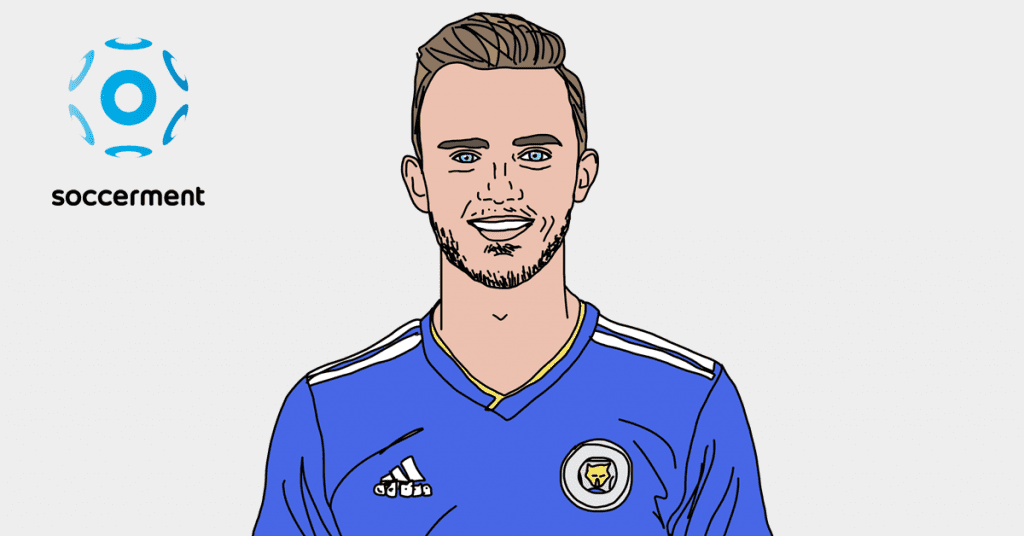 James Maddison was born in Coventry 22 year ago. A product of Coventry City’s academy, he was sold to Norwich City in February 2016, but finished the 2015/16 season on loan at Coventry. In the 2016/17 season, he was then sent on loan to Aberdeen FC, in Scotland.

On 25 September 2016, at the age of 19, James Maddison drew attention to himself, by scoring a last-minute winner from a direct freekick against Rangers FC. In total, he played 14 matches for Aberdeen. He scored 2 goals and provided 7 assists.

The following season, he returned to Norwich City and started to show his skills in the English Championship (‘EC’). He contributed to 29% of his side’s goals and he was third in the league’s goal contribution rate. Further, he was the only attacking midfielder among the top three (31% Leon Clarke, Sheffield Utd and 30% Matej Vydra, Derby).

Maddison finished the season scoring 14 goals and providing 8 assists and was Norwich’s highest contributor in terms of direct goal involvement (goals + assists): he contributed to 45% of his team’s goals. Such performance earned him a place in the EC’s Team of the Season.

At the end of the 2017-2018 season, Leicester City bought Maddison from Norwich City, in a deal worth £24m, the highest ever fee for a Championship club.

For his free-kicks, Maddison draws inspiration from David Beckham. Here he states that he modelled his free-kicks on him: “I always stand with my left foot in front of myself. I think it’s because I used to watch David Beckham when I was growing up, and he used to do the same thing“.

As of 4th April 2019, James Maddison has played 2324 minutes (in 30 apps) in the English Premier League (‘EPL’), scoring 6 goals and providing 6 assists. He currently displays a Soccerment Performance Rating (‘SPR‘) of 56, enough to grant him a place in our Under 23 Top 11 selection (he recently replaced PSG’s Rabiot).

He is not being as prolific as during the spell at Norwich City, which does not surprise us, considering the league change. However, when it comes to chance creation, Maddison is already at the very top of the Premier League, with 3.0 key passes per match, 15% percent higher than the second placed Eden Hazard.

A peek at Maddison’s spider chart, Exhibit 1, illustrating eight important features per 90 minutes, shows that he is an outlier in terms of chance creation, compared to the average Central Attacking Midfielder (‘CAM’). 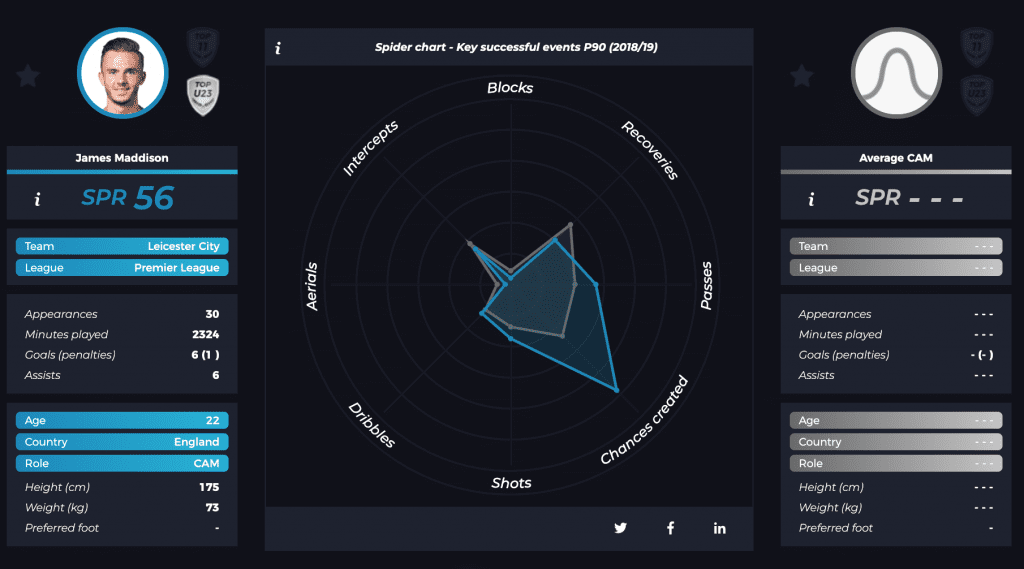 Maddison has, so far, performed in line with the Expected Goals (xG): 6 goals vs 5.88 xG. The sum of the Expected Assists (xA) are ahead of what he has accomplished: 7.12 xA vs 6 assists.

In the Exhibit 2 below, we plot the xG per 90 minutes and xA per 90 minutes for all the midfielders (defensive, central and attacking) of the Premier League (500+ mins played). As shown, despite Leicester’s mid-table ranking, James Maddison overall show very good numbers. Furthermore, he shows quite a balanced mix between finishing and assisting stats. 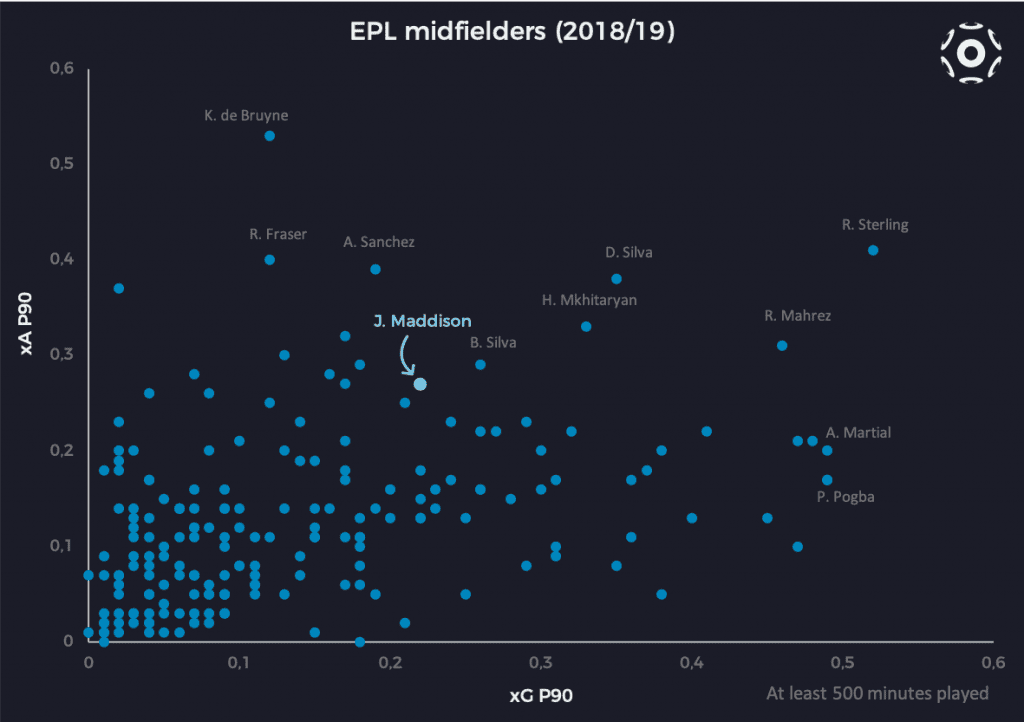 Although playing as an attacking midfielder, in the initial 7 months at Leicester, Maddison has been asked to come deep, way more often than what he was used to in Norwich. For example, recently he has been playing as a CM in a 4-1-4-1 formation.

In Exhibit 3 below, we present our “Polar” and “Stereo” charts. The Polar chart shows the events on a per-90 minutes basis, while the Stereo chart shows four selected role-specific ratios. A glance at them proves that he is a deadly passer and excellent creator, as an attacking midfielder should be. For example, we mentioned his above-average vision and technical skills: both are underpinned by the high number of through balls he is able to complete: 0.74 per 90 minutes, well above the average for both central attacking midfielders (0.27) and overall midfielders (0.18).

The stereo chart highlights Maddison’s better long pass accuracy vs the average midfielder of the top 5 leagues: 63% vs 57%.

Just after his arrival to Leicester City, he shared his thoughts about his main strengths: “I am a player who plays in the No.10 role mainly and likes to get fans off their seat with assists, goals and created chances. I think that’s what is about. Playing in that midfield position, you’ve got to chip in with the goals and the assists, because that’s what you get judged on, the end product. And I was pleased to go home with those good stats.”

Maddison had an immediate impact on the EPL, scoring 3 goals in his first 6 appearances. It seems to us, however, that he could gradually convert from being a pure No.10, into being a complete playmaker, more often coming deep in the pitch. He has already started to represent a more versatile presence in Leicester’s midfield, sometimes playing as CM in a 4-1-4-1.

That said, we still believe he is the kind of midfielder who could constantly achieve 10 goals and 10 assists in a single season, leveraging on his free-kick expertise, vision and technical ability.

The top clubs in England are likely to wait one more season, before attempting to sign him. However, we wouldn’t be surprised to see some interest already this summer.