The French midfielder Maxime Lopez is only 21 years old, but has already established himself as one the leaders of Olympique Marseille. Able to offset the lack of physicality with a remarkable dynamism, he is more prone to the build-up phase than to the defensive one. Not a box-to-box midfielder, Maxime Lopez has been able to show decent finishing skills when playing as a “mezzala” in a 4-3-3, mostly in his debut year. Since then, also due to Marseille’s tactical chances, his attacking stats have deteriorated. In our view, an improvement on this front would likely launch him as one of the most promising midfielders in Europe. 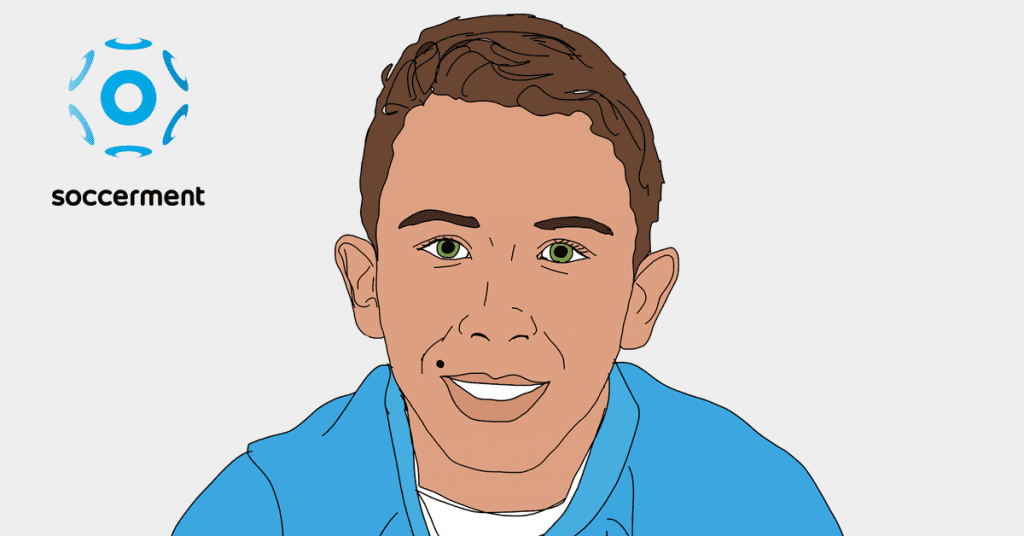 A product of OM’s academy

Born in Marseille to a Spanish father and an Algerian mother, Maxime Lopez is a product of Olympique de Marseille’s football academy, having joined OM in 2010, from F.C. Burel. In this video (in French), an interview to a very young Maxime Lopez and his first few moments at OM.

He signed his first professional contract with Marseille on 12 July 2014 and made his senior debut on 21 August 2016. Lopez scored the first goal of his senior club career on 10 December 2016, netting the opening goal in Marseille’s 2–1 Ligue 1 away victory over Dijon (video).

Small in stature (167 cm) and quite light (58 kg), Maxime Lopez is a versatile playmaker, who is able to offset the lack of physicality with a remarkable dynamism. He likes to influence his team’s build-up through short and accurate passes.

We show in the Exhibit 1 below, the comparison of his stats (per-90 minutes) vs the average midfielder (in grey). 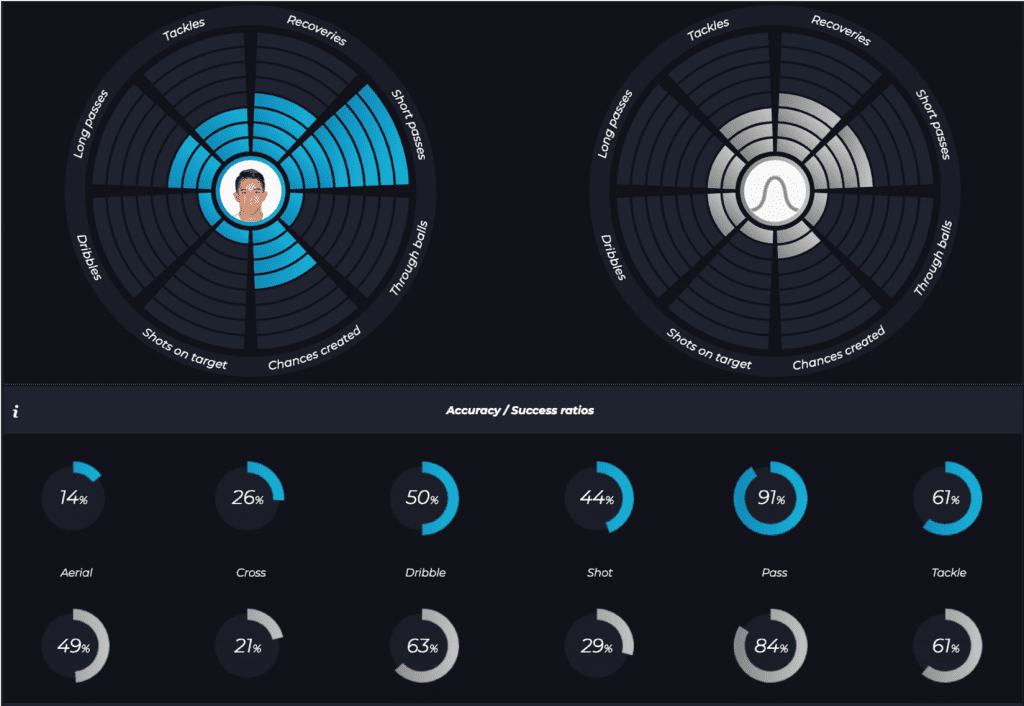 He almost doubles the average number of successful passes in the opposition half (48 vs 24.6 per 90 mins) and chances created (2.1 vs 1.1 per 90 mins) of the central midfielders in the top 5 leagues.

His defensive contribution is slightly lower than the average: for instances, Lopez recovers possession 6.2 times per 90 minutes vs 6.5 for the average central midfielder.

The three players displaying the most similar performances to the one of Maxime Lopez, according to our algorithmic system, are Stefano Sensi (Sassuolo), Jean Michel Seri (Fulham) and N’Golo Kanté (Chelsea).

Where to improve: shot selection and through balls

The scoring rate of Maxime Lopez – only 4 goals in 77 appearances in Ligue 1 – unveils that we are not looking at an attacking midfielder. The strange thing, though, is that Lopez scored three of those four goals in his first season, none last year and only one so far in the current season. We explored the historical stats and found out that both the quantity and the quality of his shots have declined in the past three years.

Quantity of the shots

Exhibit 3: Maxime Lopez, number of shots and shots on target per 90 minutes

Quality of the shots

The quality of the shots of Maxime Lopez – here measured in terms of shot-selection, specifically with the ‘Expected Goals per shot‘ metric – has also deteriorated over the past three years, as we show in the Exhibit 4.

In the current season, he is recording a meagre xG P90 of 0.01, with an average xG per shot of 0.03. Translated for the layman: every shot that Maxime Lopez is taking, carries a 3% probability to be converted into a goal, which is low. The main reason for this is that, out of the 9 shots he has taken so far, 8 were from outside the box. 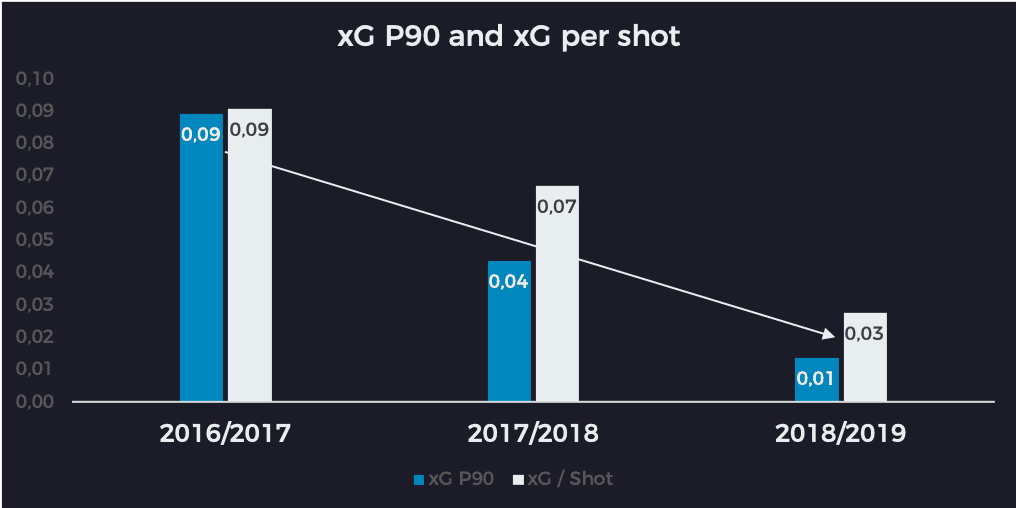 The reason behind the decreasing attacking contribution

In his first year, which coincided also with the first year of Rudi Garcia at Marseille, Maxime Lopez was playing as a “mezzala” in a 4-3-3 formation. The presence of two defensive midfielders such as Anguissa (now at Fulham) and Vainqueur (now at Monaco) and a box-to-box midfielder like Diarra, freed up the young Lopez from many defensive tasks. This is why his attacking proficiency was higher.

In the following season (2017/18), Garcia switched Marseille’s tactical formation to a 4-2-3-1, in which Maxime Lopez struggled to be the manager’s first choice. For example, in the Europa League’s final against Atletico Madrid (0-3), Maxime Lopez was not part of the starting eleven, although he played around 60 minutes, substituting the injured Dimitri Payet.

This season, Rudi Garcia has eventually chosen to use a 4-4-2 formation, in which Maxime Lopez plays as one of the two CMs. While enhancing his playmaking skills, the role keeps him away from the danger area: the percentage of touches in the opposition box is 0.7% for Maxime Lopez vs 2.0% for the central midfielders, on average.

Chance creation shows better numbers, but the number of through balls should increase

This is why the high number of chances created hasn’t been followed by many assists. One way to improve this metric would surely be to increase the number of key passes made with ‘through balls’: Maxime Lopez is currently completing 0.1 through balls per 90 minutes vs 0.2 for the central midfielders, on average. Again, we believe this has to do with his position on the pitch, rather than from a lack of vision and/or precision.

Our valuation models like him: currently part of our U23 Top11

Our algorithm assigns to Maxime Lopez a SPR of 60. As a reminder, SPR stands for ‘Soccerment Performance Rating’. He appears in our U-23 Top 11 lineup, in a midfield with Rabiot (PSG) and Fabian Ruiz (Napoli). 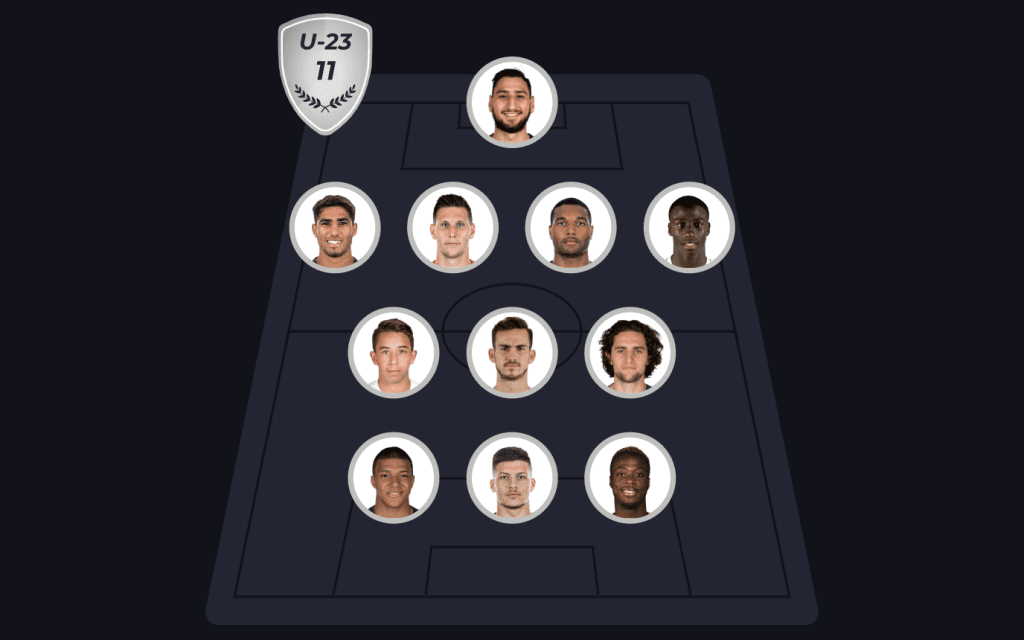 Marseille’s Maxime Lopez has already received interests from various top clubs in Europe, mainly thanks to his playmaking skills. We believe that, to go the ‘next level’, he would need to improve his attacking stats. Specifically, we would focus on the shot-selection and the quality of chance creation. However, this might require a different tactical framework from what Marseille are currently using.