In our database, we notice, many of the best forwards have something in common: they were born in 1993. Kane, Dybala, Icardi, Lukaku, Fekir, Belotti and Batshuayi, inter alia. We compare their current stats and the speed of their improvement over the last four years. Their goal conversion rate is growing exponentially. Where will they be in four years? 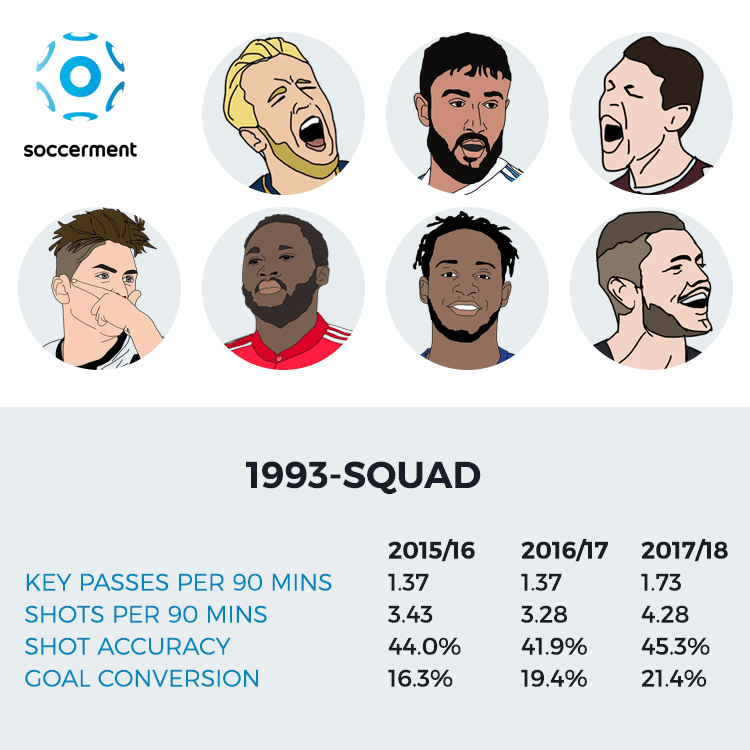 As we were writing some of the last few posts, we noticed a particular recurrence: many of the forwards were born in 1993. We thus decided to pack the “1993-squad” together (seven players), compare their current stats and see how they have developed over the past few years. We believe this could be an interesting exercise, also to better understand the medium-term potential of the players who are now <20 years of age.

Our sample is composed of the data related to Harry Kane, Paulo Dybala, Romelu Lukaku, Mauro Icardi, Michy Batshuayi, Andrea Belotti and Nabil Fekir. Some of them are on the verge of finally being recognized as “top players”, like Dybala, Kane and Lukaku. Some still need to demonstrate they are worth the starting-11 of top teams, like Belotti and Batshuayi. Icardi and Fekir are doing well with their respective teams (Inter Milan and Olympique Lyon) but, to surge to the top player status, they would need to prove themselves out of their comfort-zones.

Clearly, the list of players we use is not at all comprehensive. There are many other valuable forwards in Europe, born in 1993. We flag, inter alia, Mariano (O. Lyon), Florin Andone (Deportivo La Coruña), Luciano Vietto (Atletico Madrid), Juanmi (Real Sociedad) and Jesè (Stoke).

By looking at the combined stats of our “magnificent seven”, we can appreciate how their influence, precision and overall attacking contribution have developed throughout the past few years. 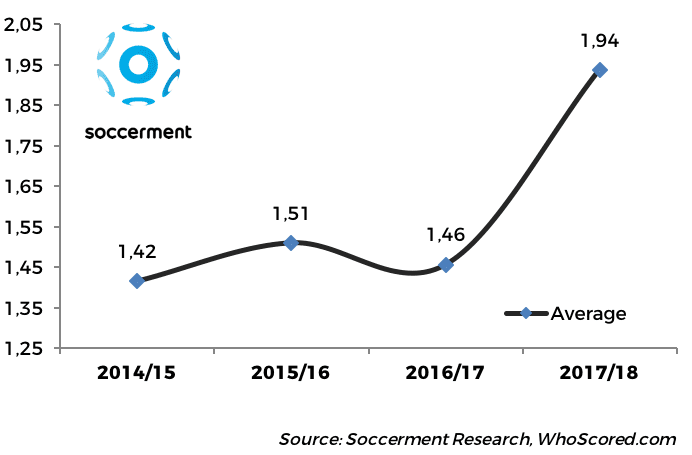 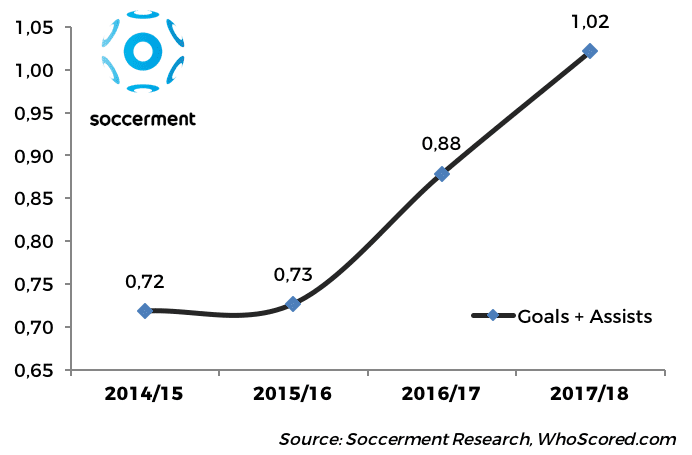 The goal conversion rate in open play (excluding set pieces, such as free-kicks and penalties), has reached 20.7% (it was 13.3% in 2014/15). Dybala, Icardi and Belotti display the biggest improvements. Icardi tops the four-year average ranking with 19.2%, which means that, in open play, he scores almost once every five attempts. A real sniper. This year, his goal conversion rate is running at 29.2% (one goal every 3.4 shots…).

Finally, if we take the sum of goals and assists per 90 minutes as a reference for the players’ finishing contribution, we see that this has increased with a compound growth rate of 12% since 2014/15. It was 0.72, while in the current season it stands at 1.02.

A brief history of their recent times

In 1993, while the players we analyse in this post were just or about to be born, Stephen Hawking’s ‘A Brief History of Time‘ (first published in 1988) was becoming the longest-running book on the bestseller list of The Sunday Times ever. Here below, we (very) briefly describe the recent careers of five out of the seven forwards in this analysis (for Dybala and Kane, please refer to the recent individual posts).

Inter Milan’s captain is the oldest of the group, being born in Feb 1993. As we stated in our Serie a top scorer preview, he is the typical “number 9”, who does not participate much to the team’s action build-up, but primarily focuses on the finishing side of things.

As an example, over the past four years, his number of accurate passes averaged 11.9 per 90 mins, 43% less than the average of the 7 players. On the other hand, he displays the highest goal conversion rate, at 21.8% in the past four years, compared to the 17.6% average for this group of players.

Born in May 1993, last summer Lukaku was signed by Manchester United (from Everton), a deal worth £75 million.

He currently tops the EPL top scorer table with 7 goals, with a remarkable goal conversion rate so far this season: 25.0%.

In the past four years, the goal conversion rate is where he has improved the most, starting from 13.6% in 2014/15 and then constantly rising up to the current level.

Fekir is an academy graduate of Olympique Lyon. He was promoted to the senior squad in July 2013, and became a regular in the team in his second season, being named FL1 Young Player of the Year.

Batshuayi has yet to find continuity at Chelsea, having played only 493 minutes in 27 appearances. It is however notable the amount of shots on target he is delivering for Conte: 2.2 every 90 minutes (52.2% shot accuracy). In the past four years, his shot accuracy has constantly been above the average among the seven players in our analysis, standing at 47.7% in the period.

Belotti is the youngest amongst our “Magnificent Seven” panel: he will be 24 year-old on 20 Dec this year. He is currently injured (damaged right-knee ligaments, at the beginning of October) and should return in November, at the earliest.

We indicated him as one of Serie A’s potential top scorers for the season, which, however, has not started in the best possible way. Apart from the injury, Belotti has struggled to score with continuity, finding the net only 3 times in 7 matches. One of the three, in any case, was probably the most wonderful goal scored in ISA so far (see gif).

For any comment, suggestion or query, do not hesitate to send us an email to: research@soccerment.com.