The World Cup champions were the second-youngest team of the tournament. It does not come as a surprise, then, that Le Blues dominate our Under 23 top-10 list, which we select through our newly-developed Soccerment Performance Ratings (‘SPR’). 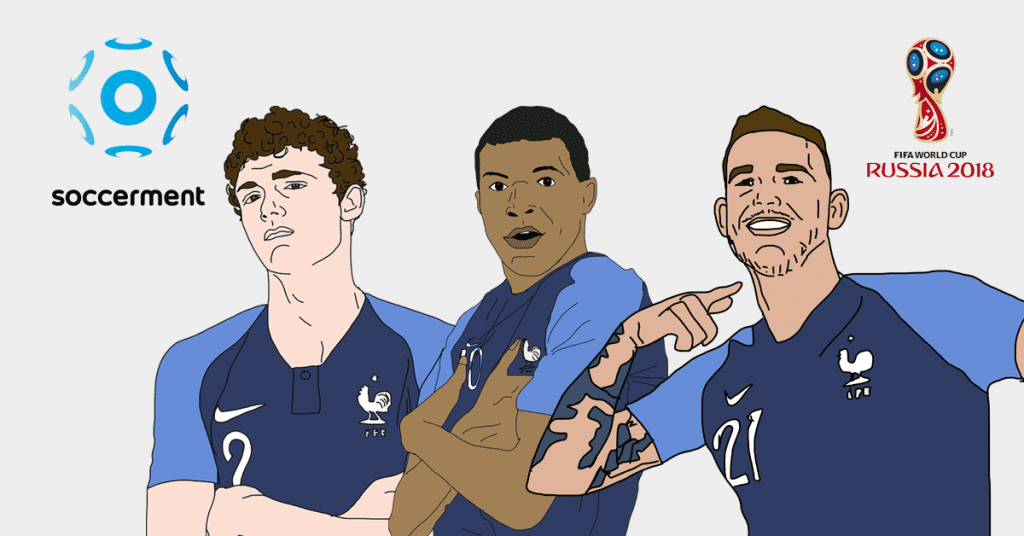 Last week, with this article, we launched the ‘Soccerment Performance Rating‘, or SPR.

SPR is a series of algorithms, which take into account all the events that happen during the course of a football match (we feed our algorithms with the data as recorded by Opta).

SPRs assess a player’s performance by breaking it down into three parts: the player’s contribution to the defensive actions, to the buildups and to the attacks. The players’ positive or negative deviations from the role averages determine their rating.

While we previously used the tool to select our Top-11 for the World Cup, here we put it at use to discover the ten best Under 23 players of the competition.

As we did with the World Cup’s top-11 selection, SPRs are adjusted in order to reward consistency, so the P90 stats are recalibrated according to the total playing time.

Davinson Sanchez played in all of Colombia’s World Cup matches, for a total of 390 minutes. His defensive contribution was significantly higher vs the average of centre-backs. His strong effort in the defensive phase was mainly explained by the number of blocks & clearings (7.8 per 90 minutes vs 5.7 average). However, he also outperformed on the number of tackles & interceptions (2.8 P90 vs 2.5 avg).

However, as we will show in an in-depth analysis next week, the 2018 World Cup confirmed that in football there is only a small correlation between the technical and physical performances. 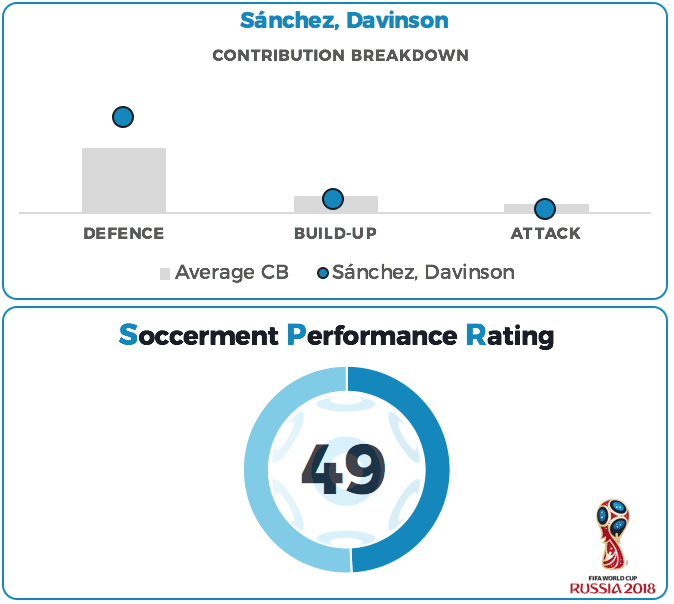 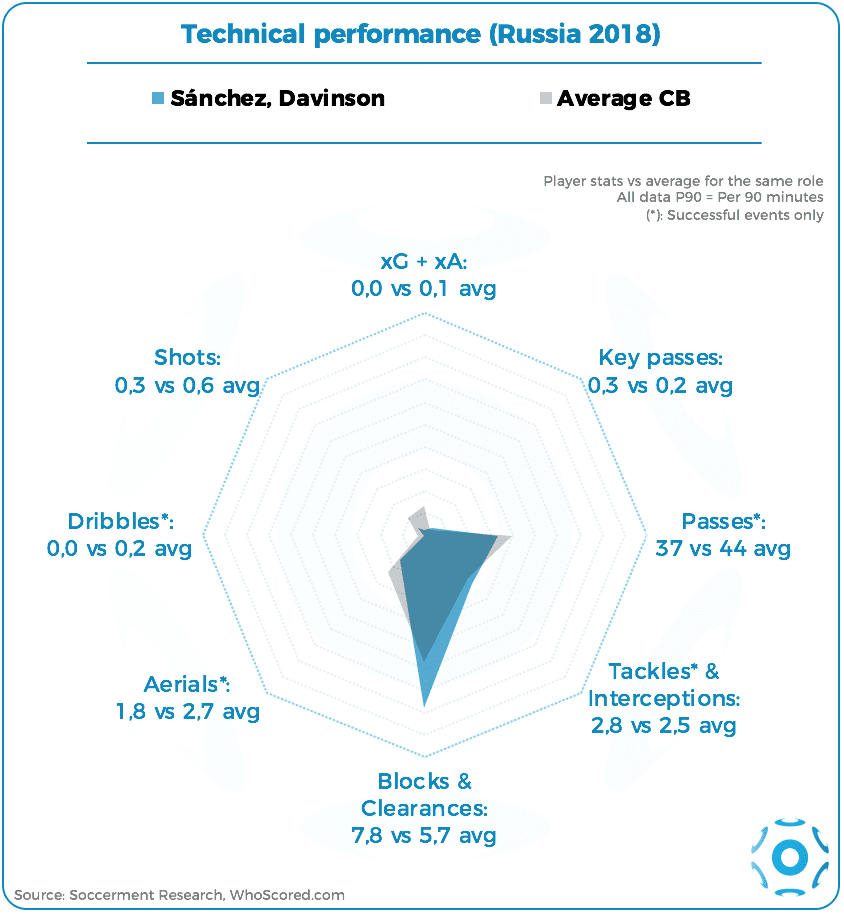 At the World Cup, José Giménez played 360 minutes in four appearances. He scored the winning goal in the final minute of Uruguay’s opening game against Egypt. His offensive insidiousness on set-pieces (in tandem with Diego Godín) represented one of Uruguay’s main attacking threats, as we detailed here.

However, in the ‘Contribution Breakdown’ below, we show that Giménez outperformed the average centre-backs mainly for his defensive effectiveness.  In particular, he stood out for the number of tackles & interceptions P90 (5.5 vs 2.5 avg), as well as his tackling success ratio (82% vs 71% avg). 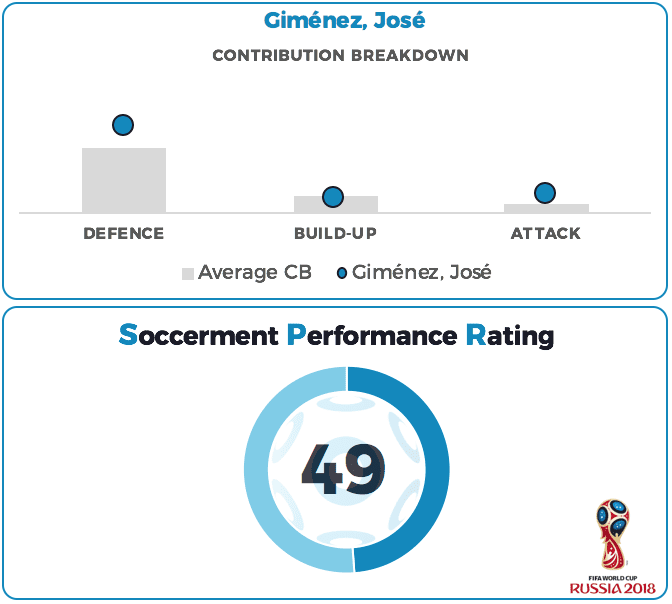 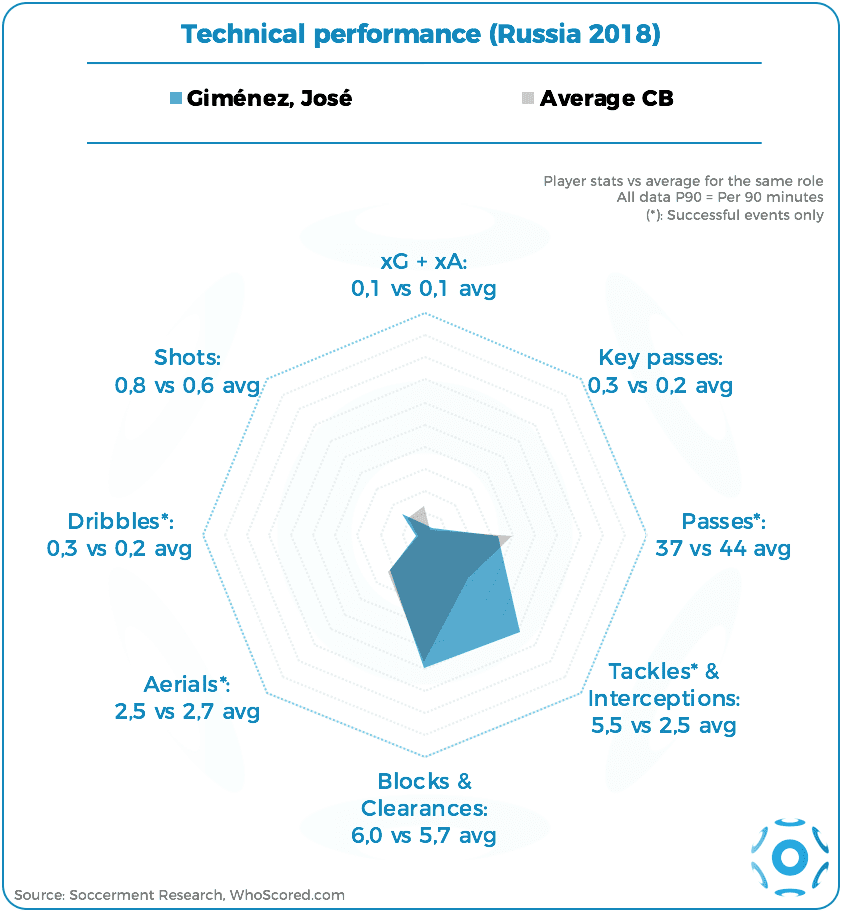 Aleksandr Golovin is the first central midfielder to enter in our U23 Top-10 list, with an adj. SPR of 50. Along with his National team, he was probably one of the biggest surprises of ‘Russia 2018’.

As we show in this post, Golovin was the top athletic performer of the competition. He was able to keep an average of 59 sprints P90 (vs 31 avg) and the amount of kilometres ran above 25 km/h was more than twice the role average (3.4% vs 1.5%).

The contribution to defence was in line with his peers, while in the build-up and attacking phases, he outperformed. In particular, the number of Expected Assists doubled the average, at 0.2 per 90 minutes (vs 0.1 P90) and the number of successful dribbles P90 was 1.3 (vs 0.9 avg). However, to be fair, we need to point our that Golovin played in a more advanced position compared to most central midfielders (his role was somewhere in between a CM and CAM, as displayed by this heatmap).

Golovin concluded the tournament with 1 goal and 2 assists, deserving a spot in our U23 top-10 ranking. 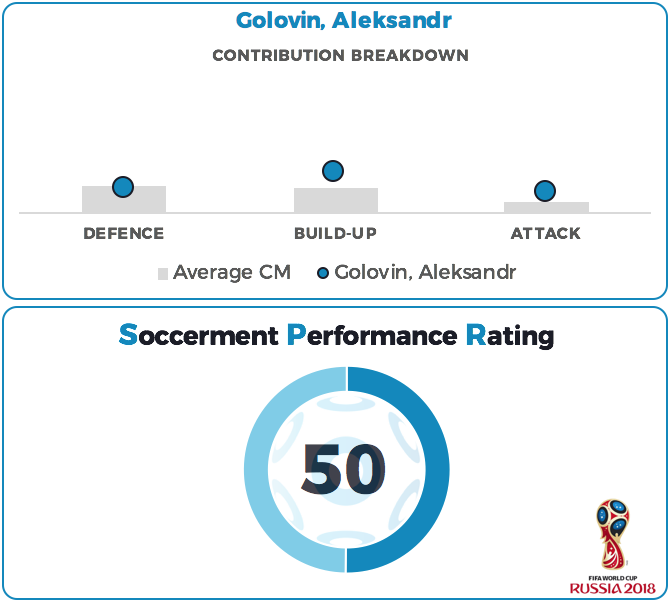 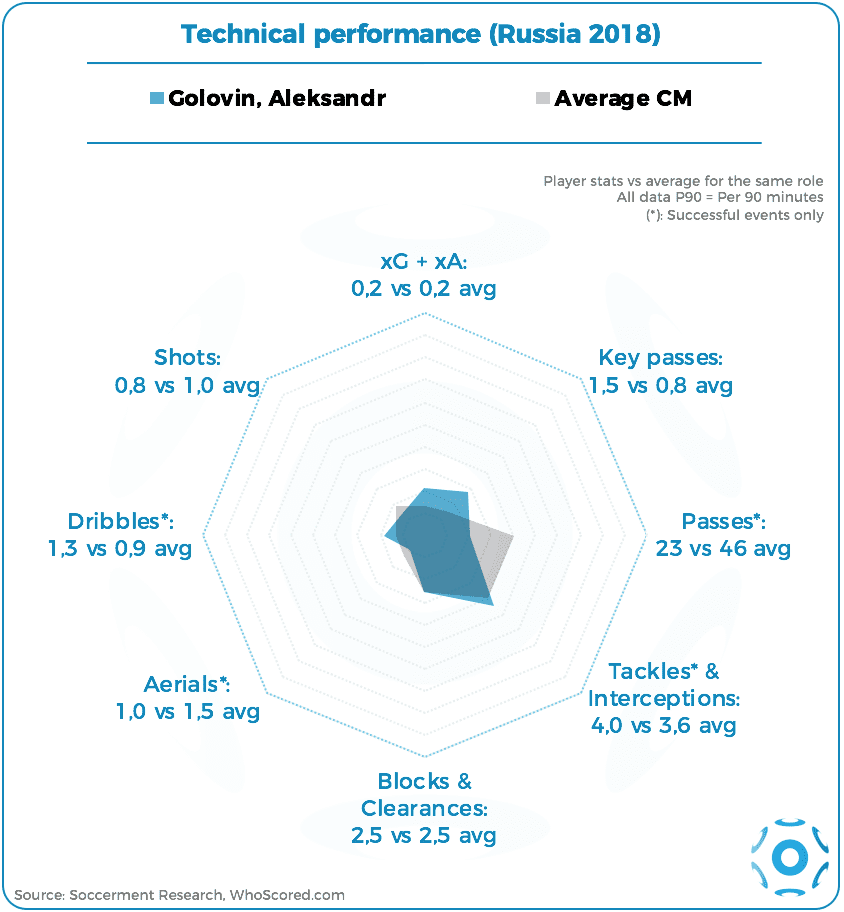 In the World Cup Lozano played a total of 317 minutes scoring one goal and serving one assist. Notably, he scored the winning goal against Germany (1-0) in Mexico’s opening group match (he was named FIFA Man of the Match for his performance).

Lozano is a very fast and insidious player. In Russia he reached a maximum speed of 33.3 km/h. Further, the amount of kilometres ran beyond 25 km/h was significantly above average (4.6% vs 2.7%).

The remarkable technical skills are highlighted by the number of successful dribbles he was able to make during the competition (4.0 P90 vs 2.1 avg for the role) and the relatively higher pass accuracy (87% vs 80% avg).

Playing as an inverted left winger, he cared more about finishing the attacks rather than providing assists to his teammates. In the World Cup, he was able to shoot 3.7 times per 90 minutes (vs 2.0 average), although with a slightly lower xG per shot (0.08 vs 0.09 avg). On the other hand, he only tried 5 crosses in the competition (none of them successfully) and the number of Expected Assists per 90 minutes was sub-par, at 0.01 vs 0.02 average. In the chart below, we show the aggregate of Expected Goals and Expected Assists, at 0.4 P90 vs 0.2 average for wide attacking midfielders. 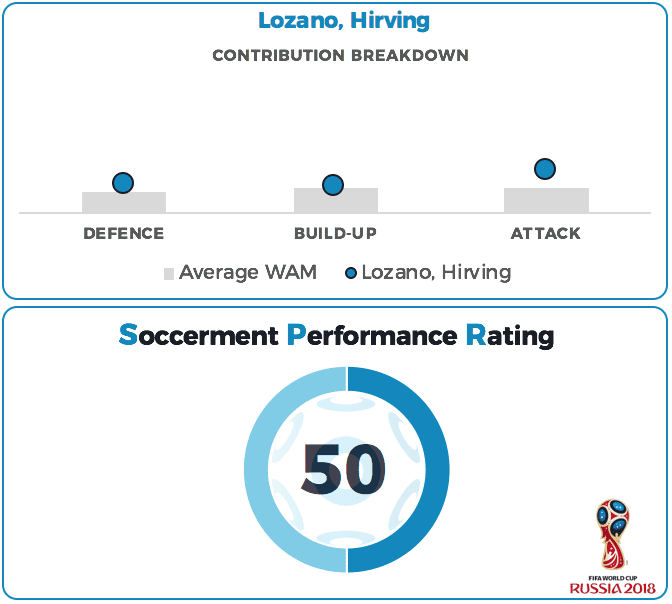 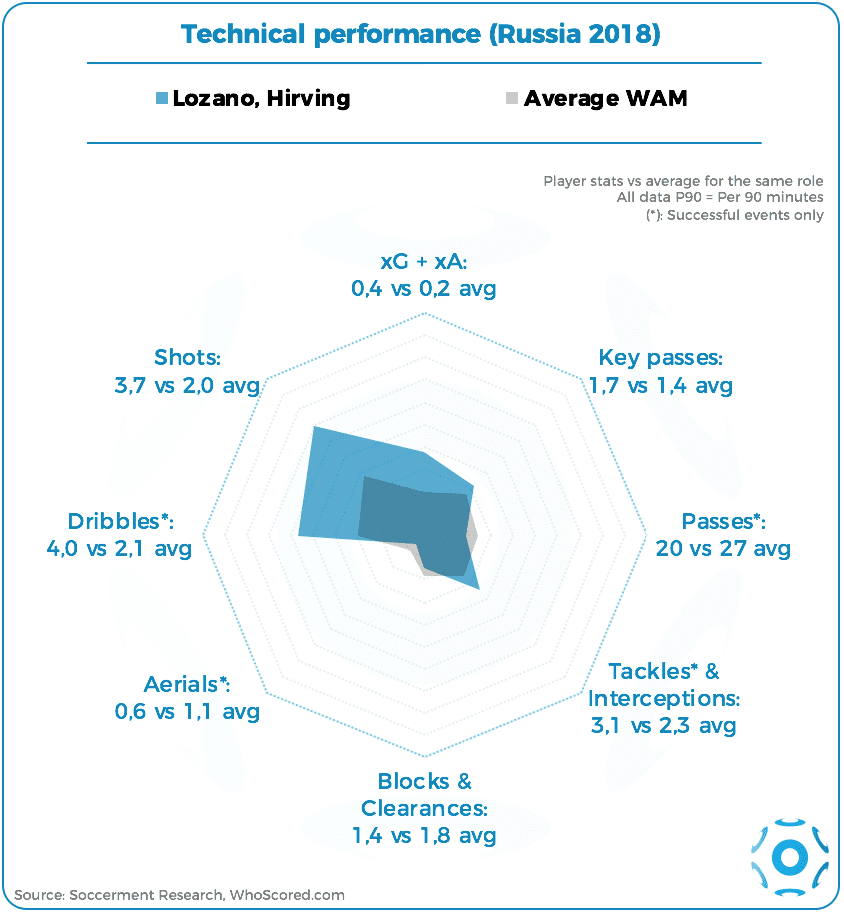 In the World Cup, Lucas Torreira made 5 appearances, for a total of 304 minutes.

Although not much of an insidious midfielder in the final third, Torreira is incredibly effective defensively.

The spider chart below describes his defensive aggressiveness: the number of blocks and clearings P90 was more than double compared to the average for the role (5.6 vs 2.5 average). Furthermore, his number of interceptions and tackles per 90 minutes was 5.3 P90, i.e. 47% above the average of 3.6 P90. In the tournament, the new Arsenal player showed himself as a hard-working defensive midfielder, who can however also play the ball (85% pass accuracy). 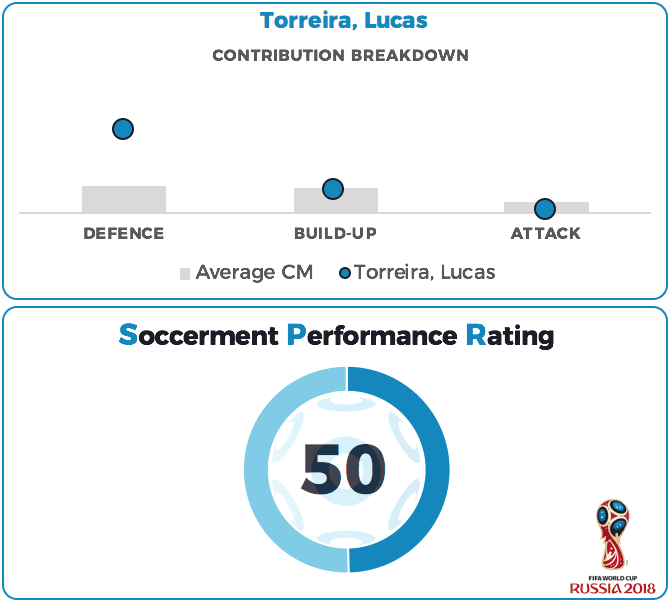 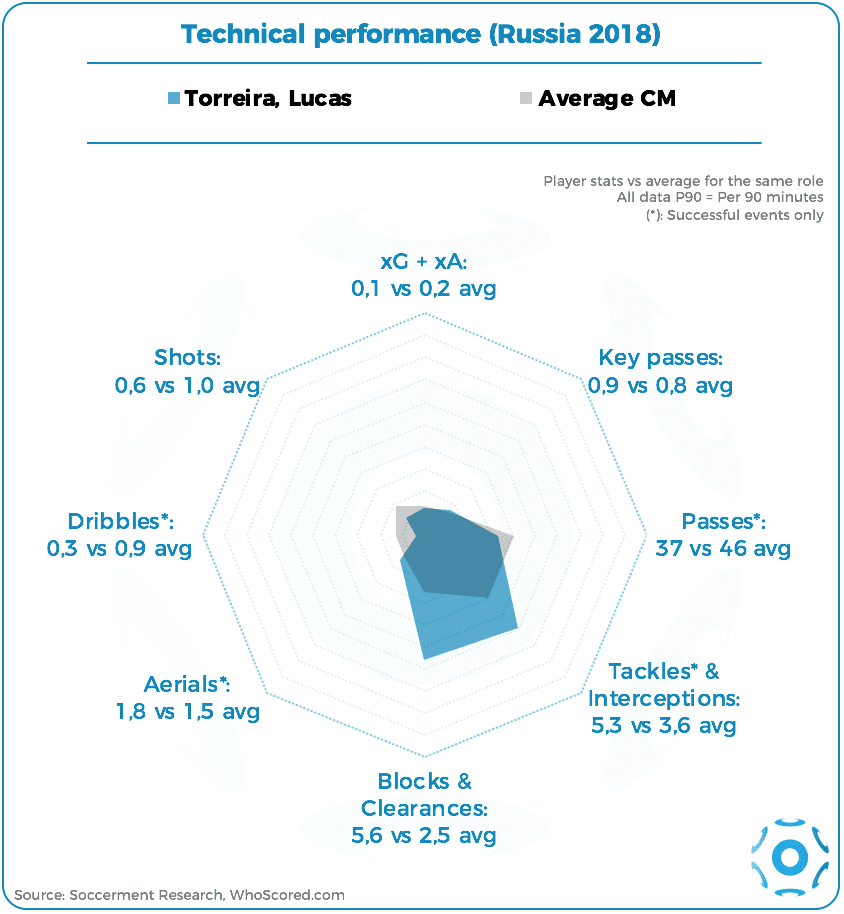 Yerry Mina scored three goals in three matches, at Russia 2018: outstanding, even if unlikely repeatable (have a look at the ‘goals vs expected goals’ outperformance). Not surprising that Mina scored all three goals through headers, being 195 cm tall.

In the World Cup, Mina was able to combine the offensive output with a sound defensive contribution. Specifically, his tackle success ratio (80% vs 71% avg) and his amount of blocks & clearings P90 (6.7 vs 5.7 avg) made him among the most effective centre-backs in the competition. 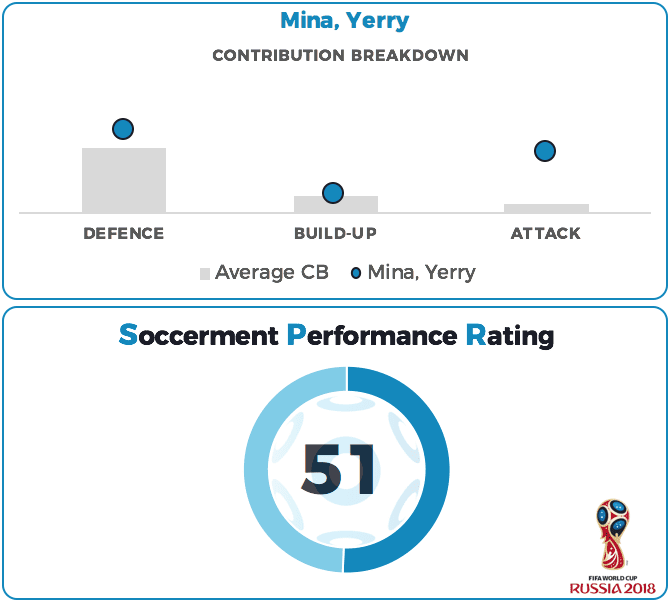 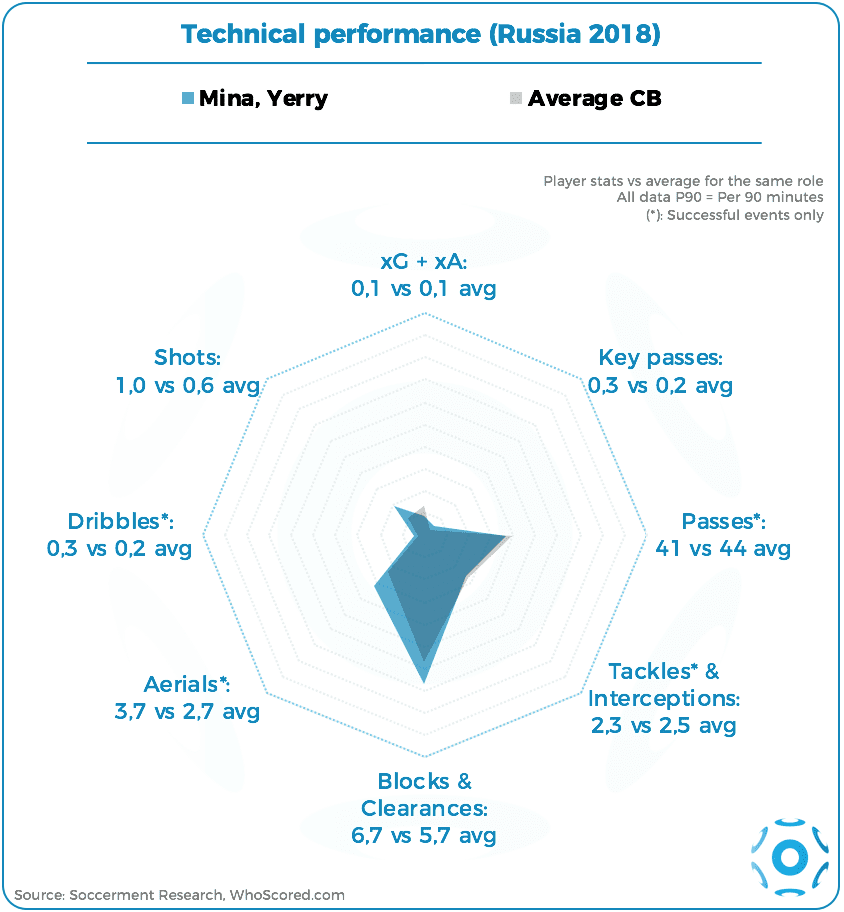 The first forward to enter our U23 Top-10 ranking is the Senegalese M’Baye Niang. At ‘Russia 2018′, in three appearances (247 minutes), he was able to score one goal and serve one assist.

Niang is a fast player (32.8 km/h maximum speed in the World Cup) and sprints often to find space between the opponents’ lines. During the World Cup, he covered 3.3% of the total distance at a speed higher than 25 km/h (vs 2.5% average for the role).

Bottom line, his attacking output was too good to be ignored, totalling Expected Goals (‘xG’) plus Expected Assists (‘xA’) of 0.6 per 90 minutes. A SPR of 51 provides him with the fourth place in our ranking. 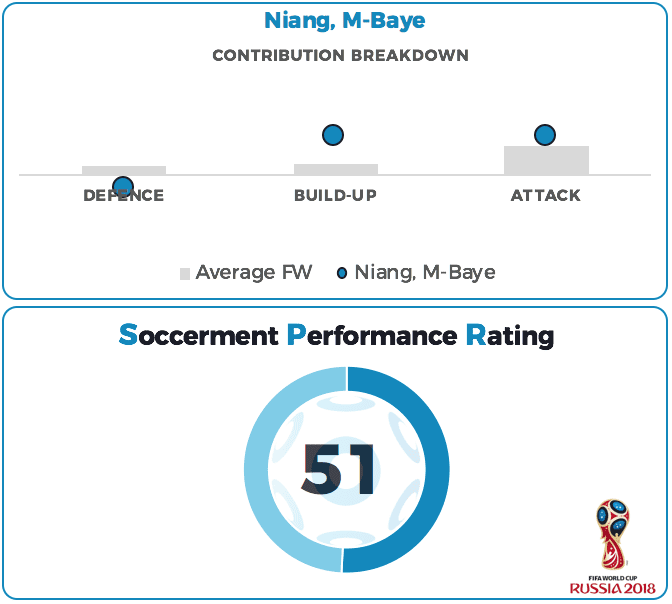 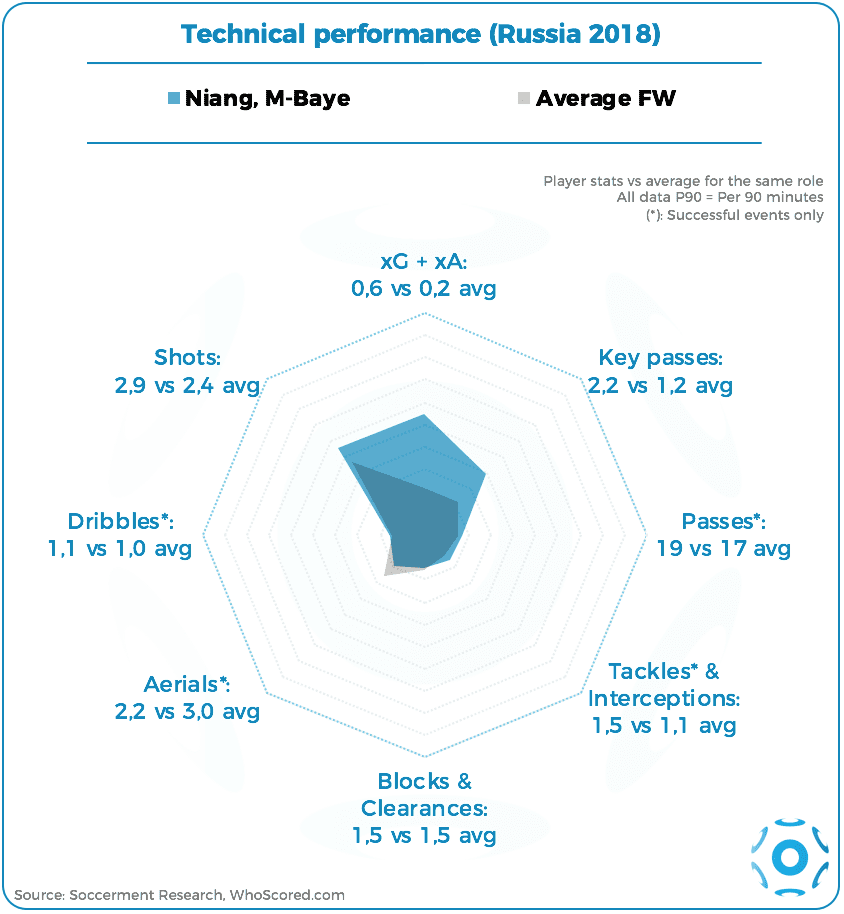 Welcome to France, the country which dominates our U23 top 3!

The third-ranked, Benjamin Pavard, scored his first international goal from outside the box in the 4–3 victory over Argentina, in the World Cup’s round of 16. And it was quite a memorable goal (see gif below).

He also became the first French defender to score a goal in a World Cup since Thuram in 1998.

In the competition, Pavard took 4 shots in total, of which 2 were on target.

The build-up contribution was in line with the full-backs’ average, while defensively he stood out on two main metrics: the sum of blocks & clearings per 90 minutes, of 5.2 (vs 3.8 avg) and the sum of tackles & interceptions P90 (3.2 vs 3.1 avg).

Our adjusted SPR for Pavard’s World Cup is 55. Enough to grant him a big transfer this summer? 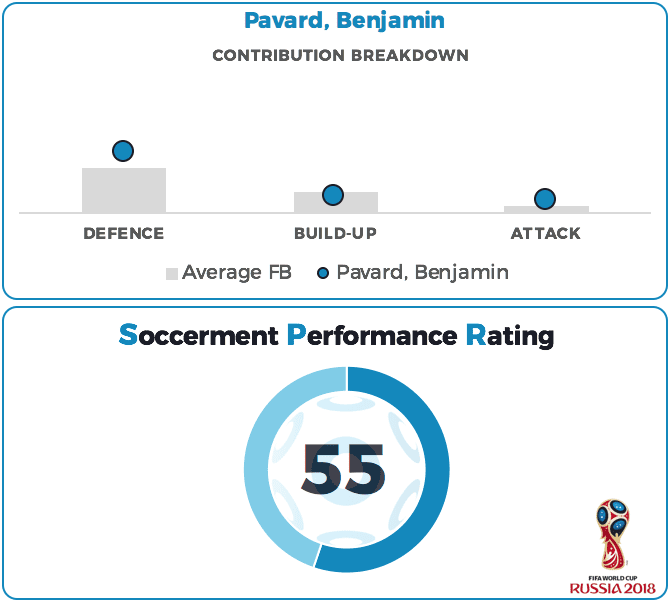 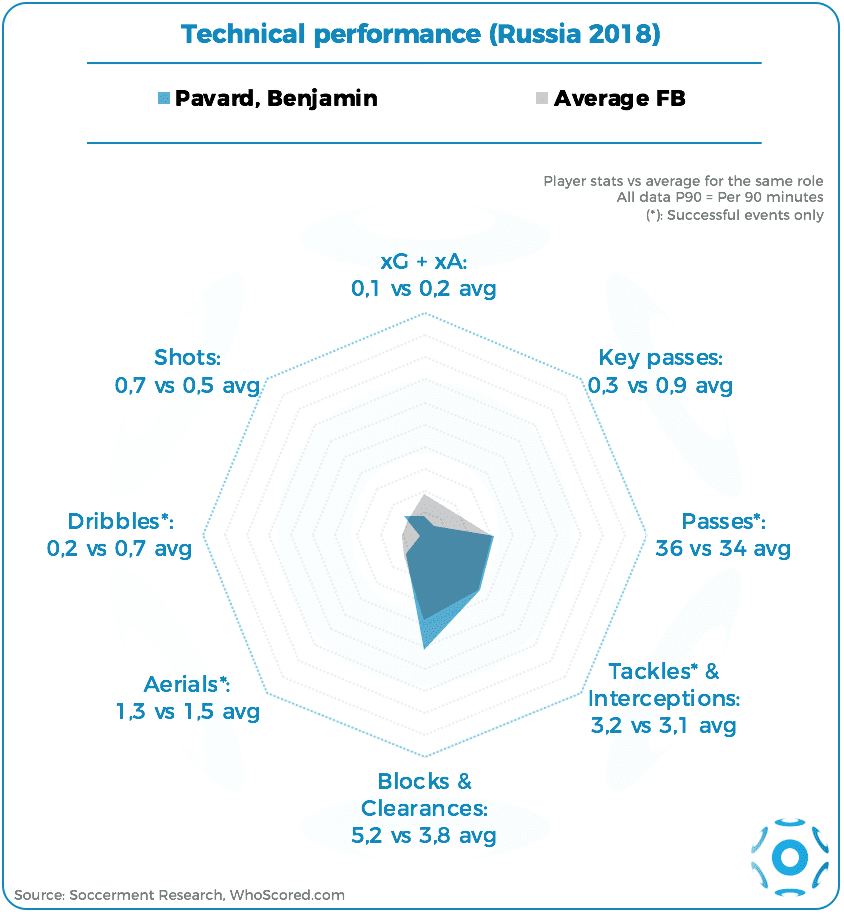 Lucas Hernàndez was born 22 years ago in Marseille, France. In the 2018 World Cup, he was always part of France’s starting-XI and was substituted only once (vs Denmark). He didn’t manage to score, but served 2 assists: one to Pavard (vs Argentina), the other one to Mbappé (in the final vs Croatia).

However, Hernàndez was especially helpful in the defensive phase. The number of tackles and interceptions (3.2 vs 3.1 avg) and the number of blocks and clearings (4.6 vs 3.8 avg) were above the full-backs’ standards.

Hernàndez is the only U23 to have entered our OVERALL TOP-ELEVEN list for the tournament (Pavard and Mbappé were among the substitutes). 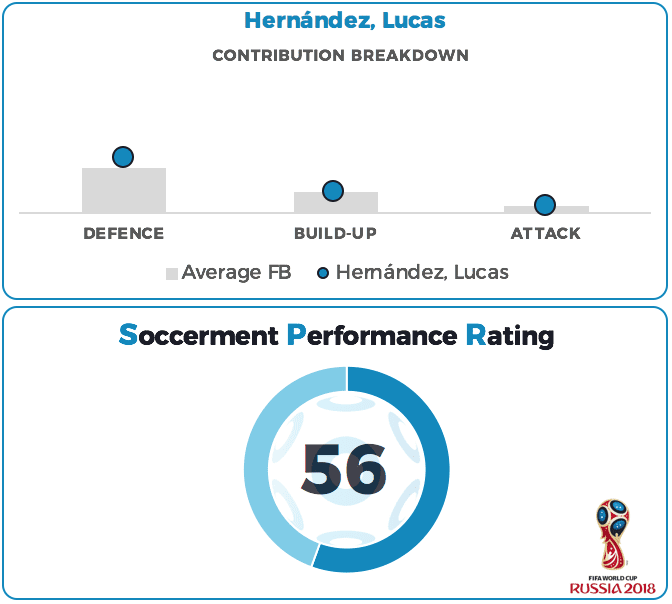 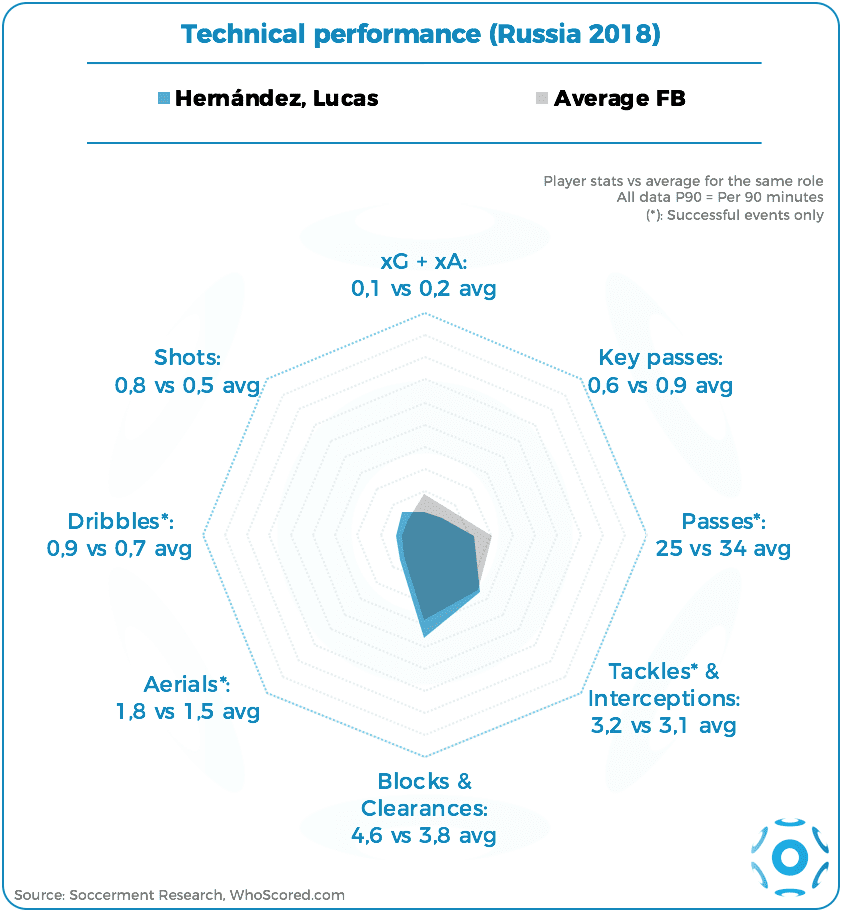 In the World Cup, Kylian Mbappé played 534 minutes (7 appearances), scored four goals and was awarded the FIFA World Cup Best Young Player. He became the second under-20 player to score in a World Cup final, following Pelè (in Sweden, 1958).

Mbappé’s ability to pass by defenders was on great display in Russia. He was able to complete 5.4 dribbles per 90 minutes. That is clearly facilitated by the fast accelerations Mbappé is able to produce.

In a box-to-box run against Argentina (thanks to which France was awarded a penalty, then scored by Griezmann), Mbappé reached a speed of 32.4 km/h, maintaining full control of the ball. It was difficult to stop him, like we find it difficult to stop watching the gif below.

Although Mbappé’s number of shot per 90 minutes was suboptimal (1.3 vs 2.0 average for wide attacking midfielders), the ratio of Expected Goals per shot was well ahead of the average, at 0.13 vs 0.09. On top, Mbappé’s shot accuracy was simply outstanding: 7 out of the 8 shots he took in the competition were on target.

Our adjusted SPR for Mbappé is 61, but… you are still watching the gif above, right? 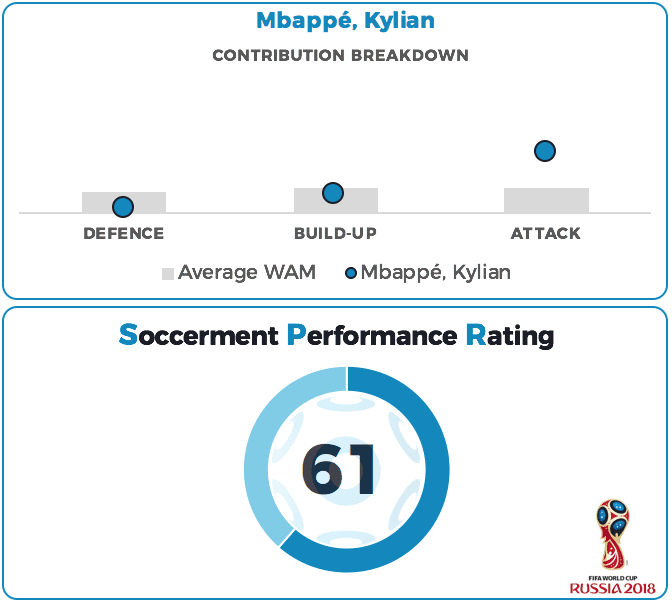 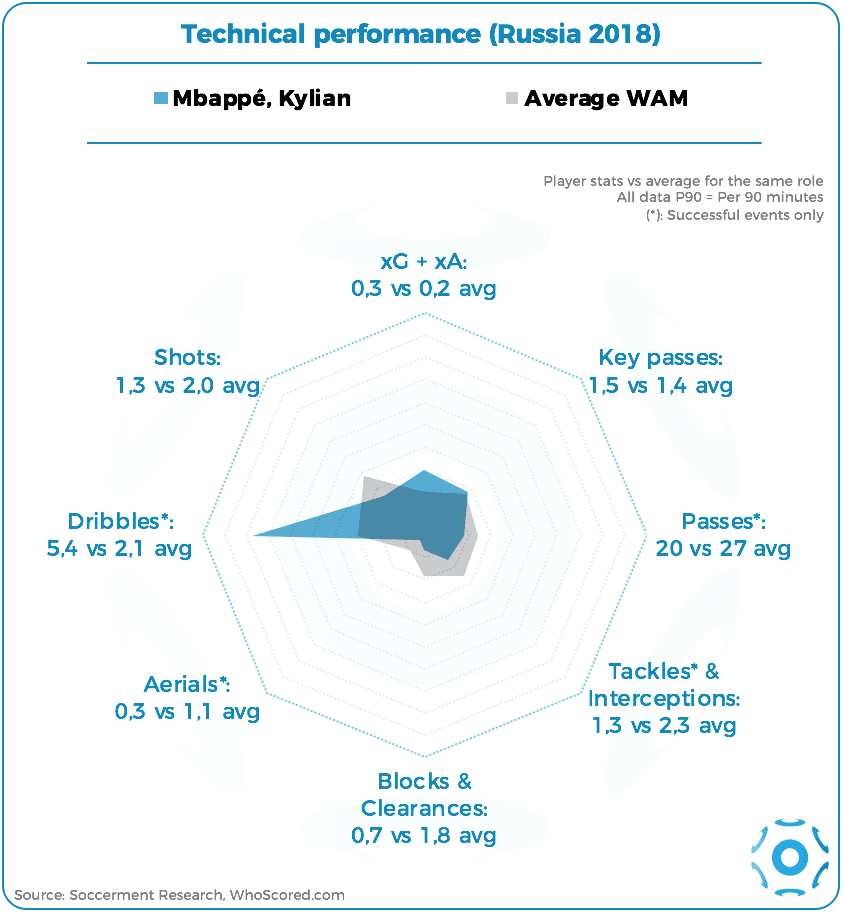 Data analyst for this report: @nick_golinelli

For any query, suggestion, or comment, do not hesitate to send us an email: research@soccerment.com.