Final part of our trilogy of posts dedicated to ball possession in European football. We look into the recurring build-up patterns of four top European teams: Barcelona, Man City, Napoli and Bayern Munich. 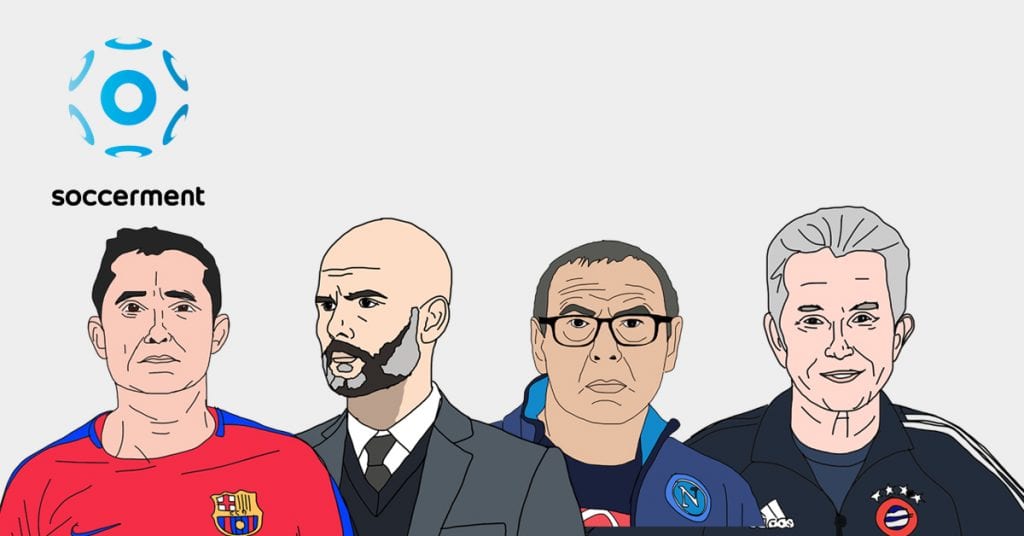 Third part of a trilogy

The FIRST PART OF THE TRILOGY (LINK) was an introduction to ball possession. How it is calculated and how the focus on ball possession is often (not always) a synonym of success. Further, we introduced the possession-to-ball chain and also started looking into the bidirectional causation problem: do the teams play better as they focus on ball possession, or the better teams have higher quality, which naturally leads them to complete more passes?

In the SECOND PART (LINK), we started digging into the build-up habits of the top European teams. We proposed the ratio of passes on total touches, as an indicator of “good football” (Napoli are topping the tables on this measure). Man City are the European team doing the most ball touches in the opposition’s third, confirming that Guardiola does not aim at “possession for the sake of it”.

In this post, the third and last of our trilogy, we narrow our focus on four teams. Specifically, we delve into the recurring build-up patterns of Barça, Man City, Napoli and Bayern. We look at these clubs because, in our view, they share a common feature: the willingness to dominate the ball and impose their playing style through a dynamically structured organisation.

Ball possession can take various forms. It can be quicker or slower, more lateral or more vertical, it can prevalently exploit the flanks or the middle of the pitch. Three main elements influence it: i) the team’s playing style (or philosophy); ii) the characteristics of the players; iii) how the opponents defend.

We approach this post with a higher focus on video analysis. However, as always, we investigate the data to corroborate our findings.

Barcelona: Messi between the lines, then throughballs to Jordi Alba

We start with La Liga’s winners, Ernesto Valverde’s Barcelona. With one match left, Barcelona are leading the table with 90 points, 12 more than Atletico Madrid. Barça have scored 98 goals (2.65 per match) and conceded 29 (0.78 P90). They are currently enjoying an average ball possession of 60.0%, with around 640 passes per match (87.2% pass accuracy).

The focus of Barcelona’s build-up phase seems aimed at exploiting the qualities of one single player. We are not talking about a “normal player”, but of Lionel Messi.

The target seems to be opening the space to Messi to play the ball between the defensive lines, fronting the goal.

Often, as soon as Messi receives the ball, Jordi Alba starts vertical runs on the left flank. Messi knows it, raises his head and chips accurate throughballs to J. Alba, who is then able to shoot or deliver key passes (often to Messi himself). Jordi Alba has delivered 8 assists so far in La Liga.

Guardiola’s Manchester City adopts a faster-than-average build-up, made possible by the high quality of their midfielders and wingers. It prevalently develops on the flanks, while targeting the penalty box.

The recurring pattern is represented by the search of fast and low balls, which specifically target the penalty spot.

While many of the other teams’ wingers tend to cross the ball as often as they can, Man City’s wide men try to finish inside, or anyway close to, the penalty box and serve low balls towards the penalty spot. This approach seems consistent with our findings on the INEFFICIENCY OF CROSSES (LINK).

The incoming forwards, or attacking midfielders, seem fully aware of where the ball would transit (=> the penalty spot) and chip it in.

We find it a very effective strategy. Quite difficult to implement, as it requires many hours of specific training sessions and a great deal of coordination between the players, but it is very efficient indeed. The four top positions for most assists in the English Premier League are all held by Manchester City players: De Bruyne (16), Sanè (15), David Silva (11) and Sterling (11). Quite a dominance.

Napoli: Start from the left side, then Insigne for Callejon’s vertical runs

Among the teams we focus on, Napoli are the only one not having won their league, as they came second in the Serie A (Juventus won their seventh Scudetto in a row).

Nonetheless, Napoli have certainly left a mark onto European football this year, prevalently due to their fluent passing game. It is also worth highlighting that Napoli’s budget is much lower vs the other teams we are analysing in this post (and Juve’s). With one match to go, Napoli display an average ball possession of 60.1%, with more than 720 passes per match and an accuracy of almost 88%. So far, they have scored 75 goals (2.03 P90) and conceded 28 (0.76 P90).

Sarri’s Napoli prefer starting their build-ups from the left side, where around 47% of the attacks come from. We believe this has to do with the players’ specific characteristics: Marek Hamsik, who in Napoli’s 4-3-3 plays as left midfielder, displays a higher technical ability than Allan, who plays on the right. The same could be said for Faouzi Ghoulam & Mario Rui vs Elseid Hysaj.

What Napoli often do is to overload the left flank and complete many one or two-touch passes. When Lorenzo Insigne receives the ball, Josè Callejon knows he needs to start running behind the defensive lines.

Bayern: Exploiting the flanks, up to the “Raumdeuter” to seek space

After a difficult start of the season, Joseph “Jupp” Heynckes replaced Carlo Ancelotti as manager of Bayern Munich, leading the Bavarian club to their sixth consecutive Meisterschale.

The build-up of Jupp Heynckes’ Bayern Munich develops prevalently on the flanks, where they target numerical superiority.

Bayern take advantage of the one-to-one skills of the “old” Arjen Robben (34) and Franck Ribéry (35) who most often have the support of the younger Joshua Kimmich (23) and David Alaba (25).

Once numerical superiority on the flanks is established, it is then time for the “Raumdeuter” Thomas Müller to actively seek space. Raumdeuter, according to Müller himself, means “interpreter of space”, finding the gaps in the opposition defence. Müller played a total of 1966 minutes in the German Bundesliga (‘GB’) this year, scoring 8 goals and delivering 14 assists (top-ranked in GB).

The dataset was sourced from WhoScored.com.

For any comment, suggestion or request, do not hesitate to send us an email to: research@soccerment.com.