Who have been the best free-kick takers in Europe over the past five years? Lionel Messi? Cristiano Ronaldo? According to our research, neither of the two. After analysing all the free-kicks taken in the top 5 European leagues since 2014/15, we arrive to some counterintuitive conclusions. 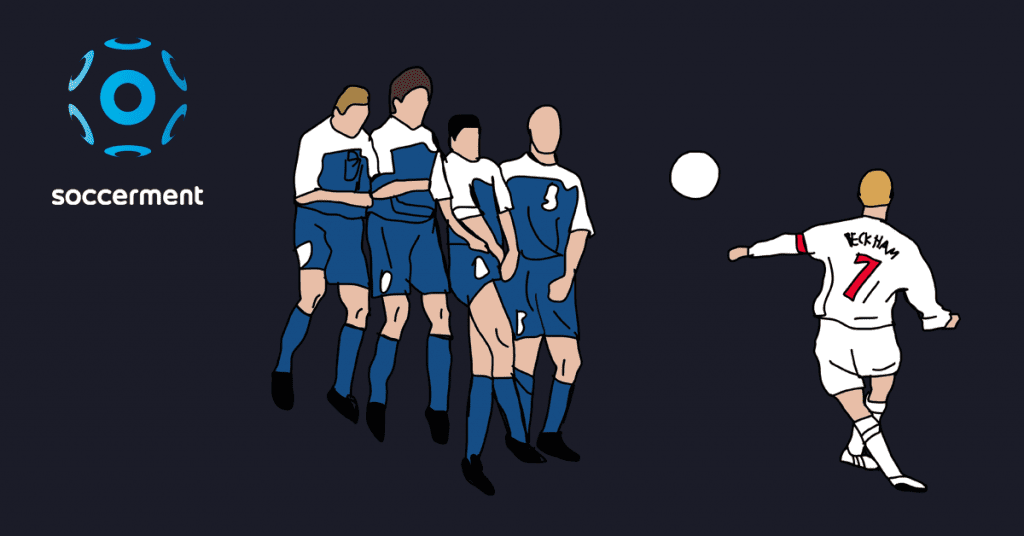 Andrew is attempting yet another dribble. The defender tackles him with energy. Too much impetus, the referee whistles a foul. The free-kick will have to be taken from just outside the box, the perfect spot for a direct attempt.

The coach’s instructions are kind of clear. Arthur (#3), who is left-footed, would take the ones from the right. James (#7) would instead take the ones from the left side, unless the free-kick is from a long distance. In this case, Arthur would try to leverage on his power and the ability of striking the ball with the outside of his foot. In training, he once scored a goal which was pretty similar to the one of Roberto Carlos against France…

The ball position is however very central this time around, suiting both a right and a left footed. James and Arthur both wish to take the shot. They try to settle the contest, but don’t find an agreement. They are both preparing for taking that free-kick…

Direct free-kicks: a game of recognition and execution

Direct free-kicks are quite a rare event in a football match. And like for the other rare events, the maximisation of the scoring opportunities is more important than in normal circumstances. For this purpose, a careful selection of the free-kick taker, is key.

Being a rare event, though, such selection is a very difficult task. Whilst, in training, the coach has plenty of time to assess her/his players on various direct free-kicks, the pressure which an official match provides could completely change the picture.

There are players who, simply, can handle the pressure better than others. The coach will always rely on them, even when some other players show better skills in a more “relaxed” environment, such as a training session.

Take for instance Cristiano Ronaldo. The numbers that we will show later in the analysis, do not highlight him as one of the best free-kick takers in Europe (in the past 5 years). However, we still have a vivid memory of his free-kick against Spain in the latest World Cup. Somehow, the pressure of the decisive moments is able to enhance his performances.

Thanks to that, he has gained the recognition from his coaches and teammates and it is quite unlikely not to see him taking a free-kick.

The recognition, in turn, needs to be confirmed over time by a good execution. The higher the initial recognition, the more time the player will be given to prove that she/he is able to execute well. However, in the long run, recognition and execution are intertwined.

Goals from direct free-kicks are very rare, that’s why they are so memorable

Our dataset, consisting of the top free-kick takers in Europe (150 players), shows an average number of direct free-kicks of 0.29 per 90 minutes, per player.

This group of players show a better conversion rate than it is normally associated with direct free-kicks: 12.9% average vs 6%. By multiplying their average conversion rate (12.9%) to the number of free-kicks per 90 minutes (0.29), we obtain how many goals from direct free-kicks these players have scored every 90 minutes, on average: 0.037, i.e. 1 goal every 27 matches. Quite rare, right?

In the Exhibit 1 below, we display a snapshot of the dataset, without filtering for the number of shots and/or goals. Most of the players have scored less than 5 free-kicks. 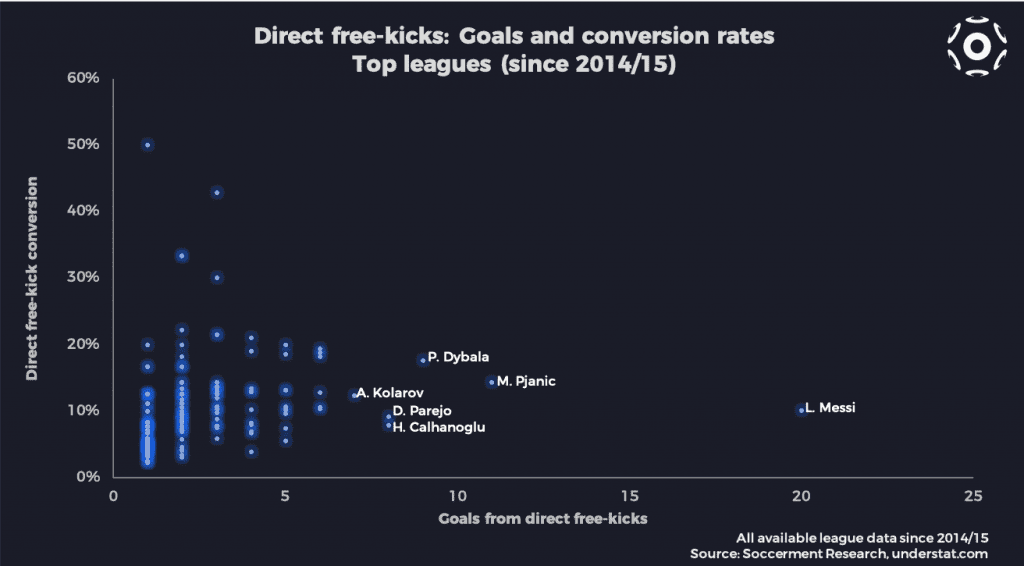 Exhibit 1: Number of goals and conversion rates of the top free-kick takers in Europe 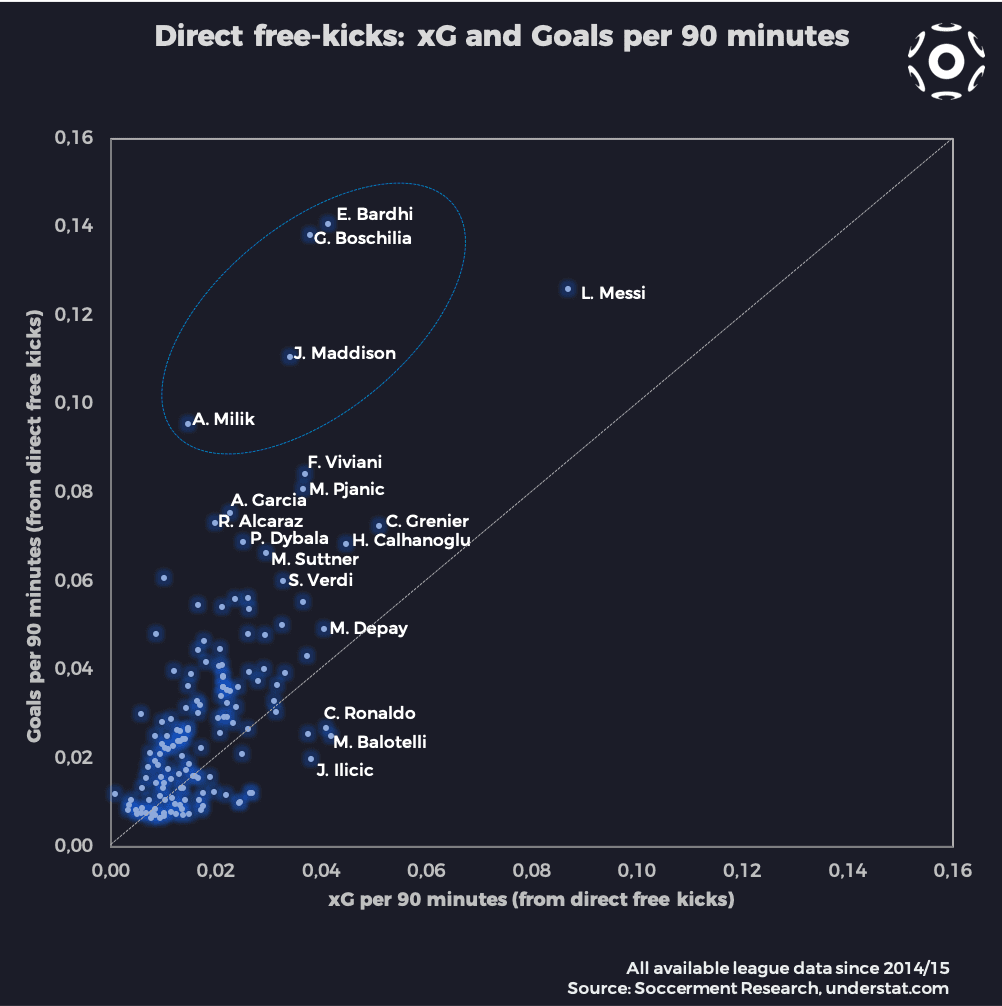 Exhibit 2: Expected Goals and Goals from direct free-kicks (per 90 mins)

As our dataset represents the top free-kick takers in Europe, the vast majority of its players outperform the relative xG model.

There is a handful of players, however, able to outperform xG better than the others, even better than Messi. These are Enis Bardhi (Levante), Gabriel Boschilia (Nantes), James Maddison (Leicester) and Arkadiusz Milik (Napoli).

On the other hand, some players seem to underperform their Expected Goals from direct free-kicks: Cristiano Ronaldo (Juventus), Mario Balotellli (Marseille) and Josip Ilicic (Atalanta).

Fair to point out that the dataset, starting in 2014/15, misses many of Cristiano Ronaldo’s previous goals (Premier League record of 4 goals in one season, achieved twice, as we said earlier).

So, who are the best free-kick takers around?

We now have a fairly good view of the top free-kick takers in Europe. For an even better idea, we mix the conversion rates of the Exhibit 1, with the Expected Goals of the Exhibit 2 above.

We look into the Expected Goals per shot (‘xG per free-kick taken’), which provides a measure of shot difficulty. The lower the xG per shot, the more difficult the shots taken by that player were, on average.

We plot the xG per free-kick and the conversion rates in one chart, after applying some filters: we are only looking at the players have attempted more than 10 free-kicks and that have scored at least 3 goals. 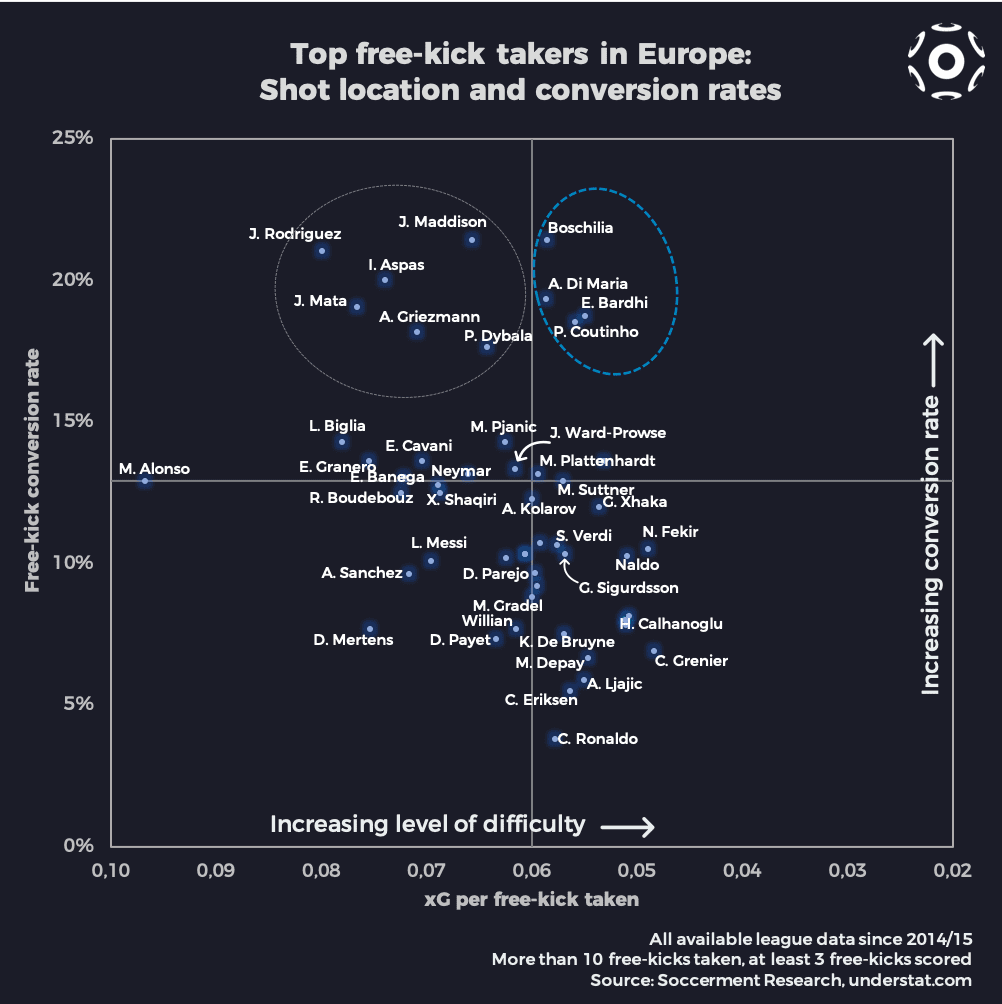 The emerging chart will probably provide the reader with some counterintuitive results:

Out of the corner of his right eye, James takes a glance at his teammate. Arthur seems ready to take the shot.

The ref whistles. They both go for the ball.

Arthur runs first and faster than James. He is about to take the shot, with his left foot. Not clear if he’s going for power or for precision.

However, with a mischievous movement, Arthur misses the ball on purpose. The move disorients the players forming the barrier, who have jumped in unison.

James promptly grasped his teammate’s trick and started his usual routine. An almost imperceptible jump, followed by a few short steps. He shoots.

With the inside of his right foot, he curls the ball, above the barrier. Top left corner. Goal.