We analysed the contractual details of all the 548 players of the Italian Serie A (‘ISA’) and then aggregated the data by team, by role, by country and by age. The average salary per player, net of taxes, is €1m per year. The top-earner is Juventus’s Cristiano Ronaldo, €31m per year, costing more than the entire team rosters of Chievo, Spal and Empoli, combined. According to our calculations, the “median” ISA player would earn around €11m in a 19-year career (18-36 year-old), with a peak salary of €1.1m, at around 30 years of age. If you are planning a Serie A career, you should know that forwards earn 27% more than the other players. 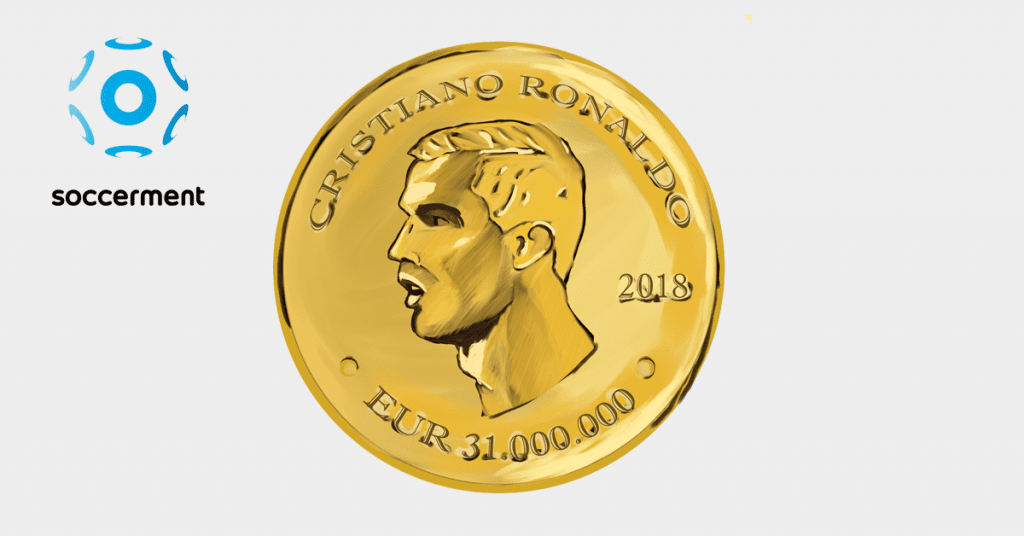 We calculate that more than one-third of the increase is due to Cristiano Ronaldo alone, who will earn a net salary of €31m at Juventus (€62m gross of taxes, using the same tax rate of GdS). 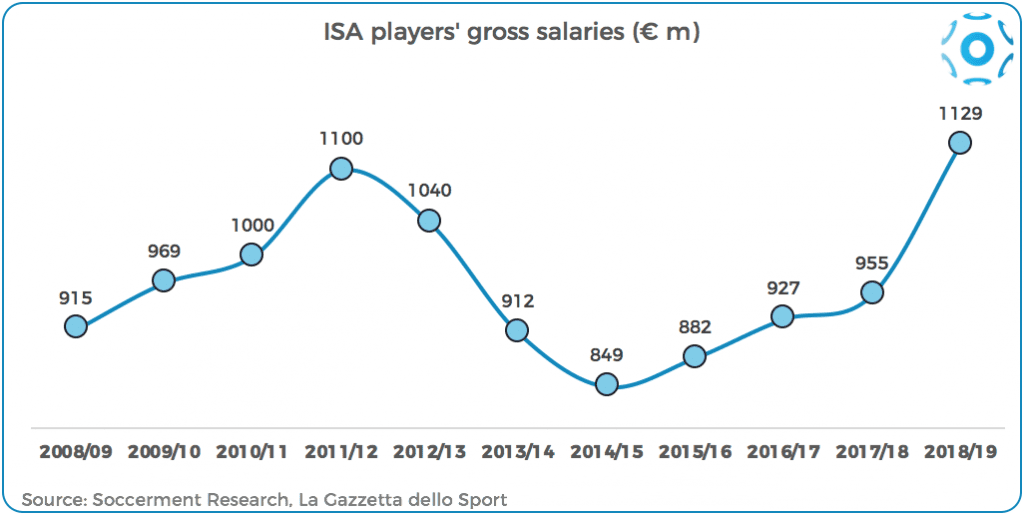 According to the Global Sports Salaries survey (‘GSSS’, link) for the 2017/18 season, the Italian Serie A was the third-ranked league among the top-5, when it comes to both the total salaries and the average (gross) salary per player. The English Premier League (‘EPL’) was the richest tournament and Spanish La Liga (‘SLL’) was second.

In the chart below, we include both the numbers as published by La Gazzetta dello Sport and those displayed by GSSS. You will notice that the gross salaries related to the 2017/18 Serie A are different. It seems this is mainly due to the GSSS’ methodology and their “first-team” definition, narrowing the team rosters as compared to GdS, which displays more than 30 players in a handful of cases. 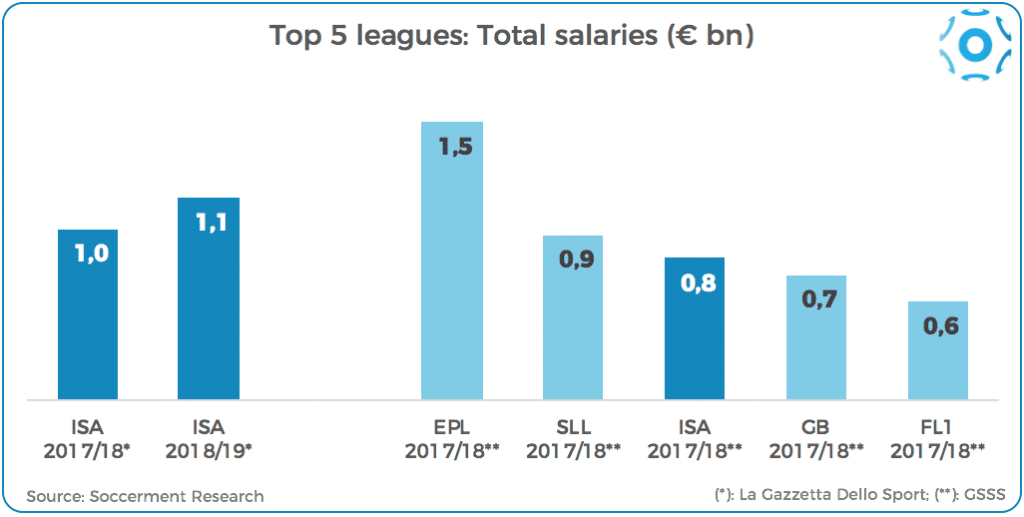 According to the numbers provided by the GdS, the “inequality” in the Serie A has increased further this year. The average salary per player of Juventus will, in fact, be roughly 17 times that of Empoli. 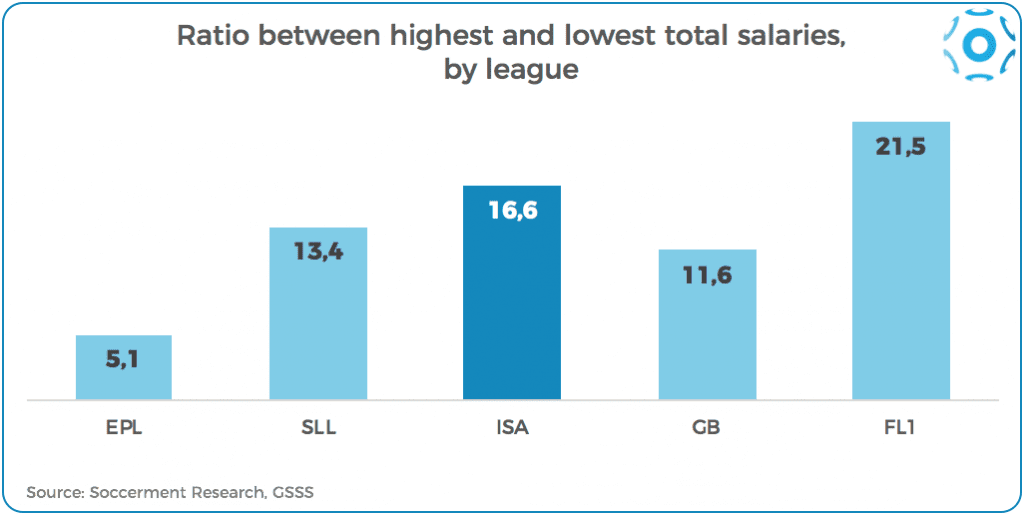 Chart 3: Ratio between the highest average salary per player and the lowest, top-5 leagues

In the chart 4 below we reported the Italian Serie A’s total salaries (gross of taxes), as published by La Gazzetta dello Sport on 4 September 2018.

We are not saying that there cannot be exceptions to the rule and that the table rankings will follow the salary budgets. In chart 12 below, we show for instance that, last year, some teams were able to outperform the salary-to-points correlation (Napoli, Atalanta and Lazio, to name a few), while others underperformed. However, the correlation is normally quite strong. For the 2017/18 Serie A, the R-squared was 72%, while it was 71% in EPL and 61% in SLL. 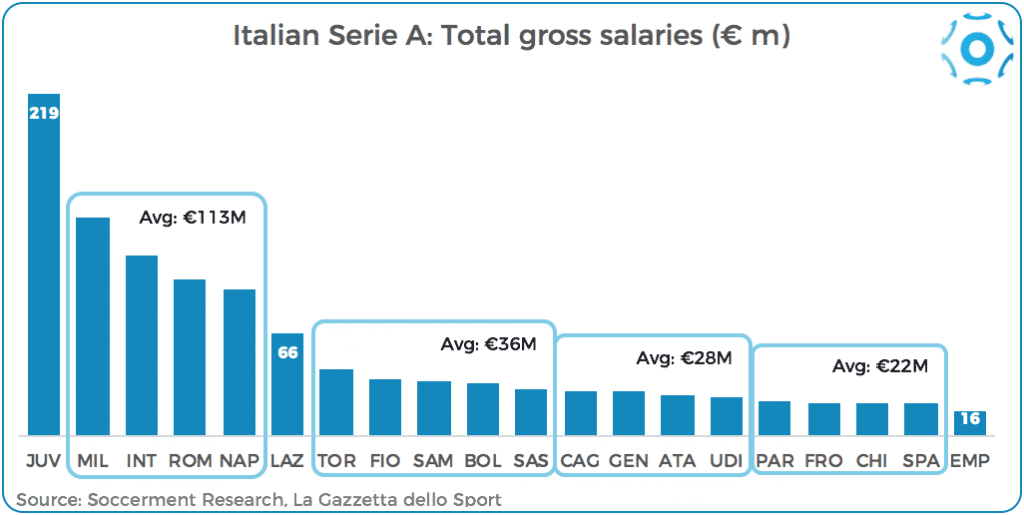 How much does a Serie A player make in one year, on average?

Net of taxes, footballers in the Italian Serie A earn around €1m per year (€562m total net salaries for 548 players). We calculate that the median net salary is however less than €600k.

Apart from Donnarumma, the top-earners among the under-23 are Alessio Romagnoli (AC Milan), Patrick Schick (Roma) and Franck Kessié (AC Milan). 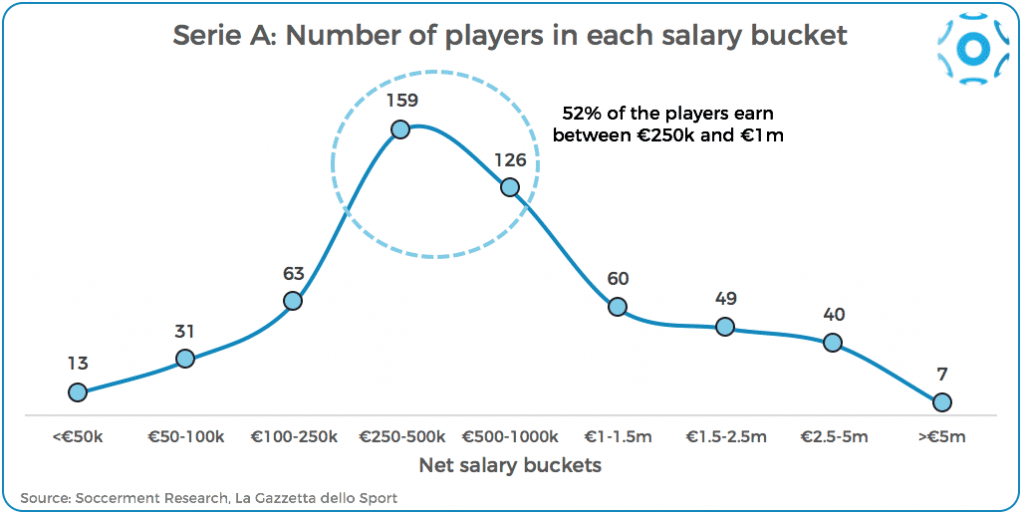 Chart 5: Number of players in each salary bucket

In the two charts below we represent the distribution of net salaries by age. In both charts we excluded the outlier Cristiano Ronaldo, in order to improve readability. His net salary of €31m is kind of off the charts, distorting the overall view. 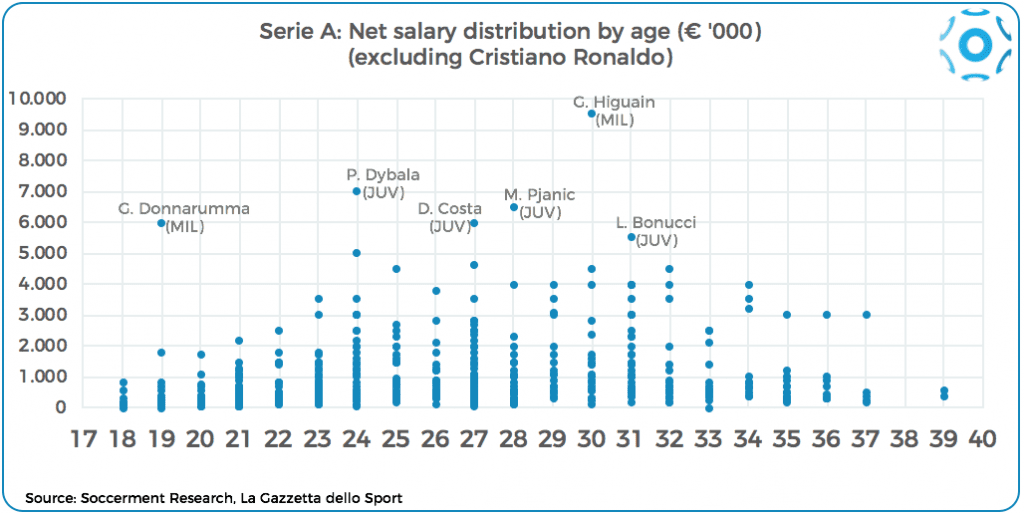 In chart 7, the reader could appreciate the steady increase of the net salaries as the players approach 31 years of age and its subsequent reduction. 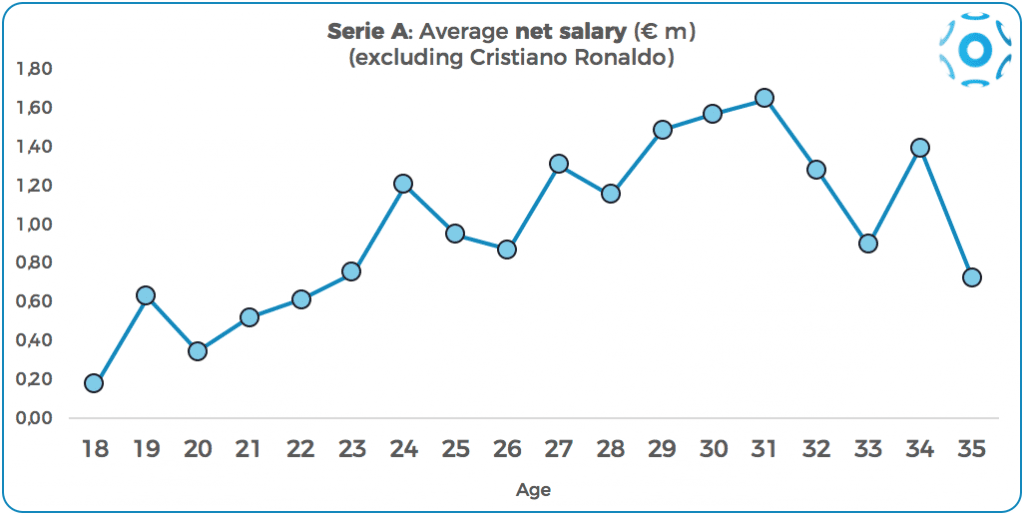 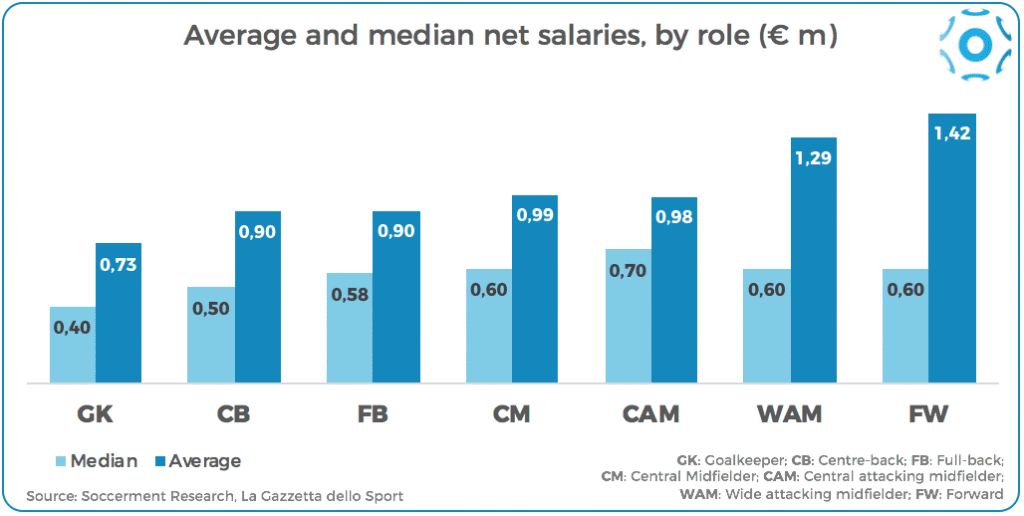 It might be the first time in the history of the Italian Serie A that a single player earns more than an entire team roster.

Cristiano Ronaldo, with a net salary of €31m (hence, a gross salary of €62m, using the same tax rate applied by GdS) surpasses, by himself, not just one, but 14 team rosters. He will actually earn more than three team rosters combined: Chievo (€21m), Spal (€21m) and Empoli (€16m). 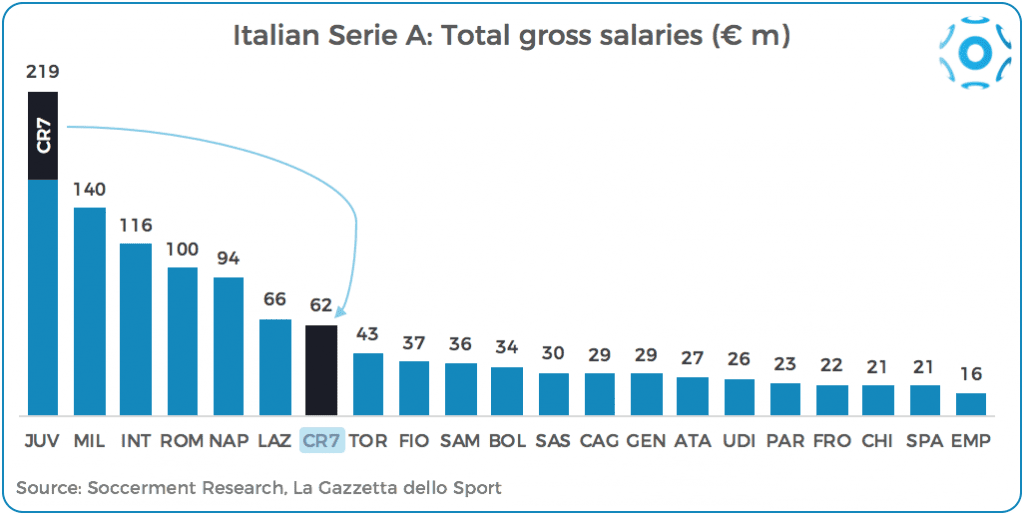 How many Italians in the Serie A? How much do they make?

Out of the 548 players we counted, there are 232 Italians playing in the Serie A, which means less than half of the total (42%). Parma is the team showing the highest share of domestic players (77%), while Fiorentina the lowest (15%). 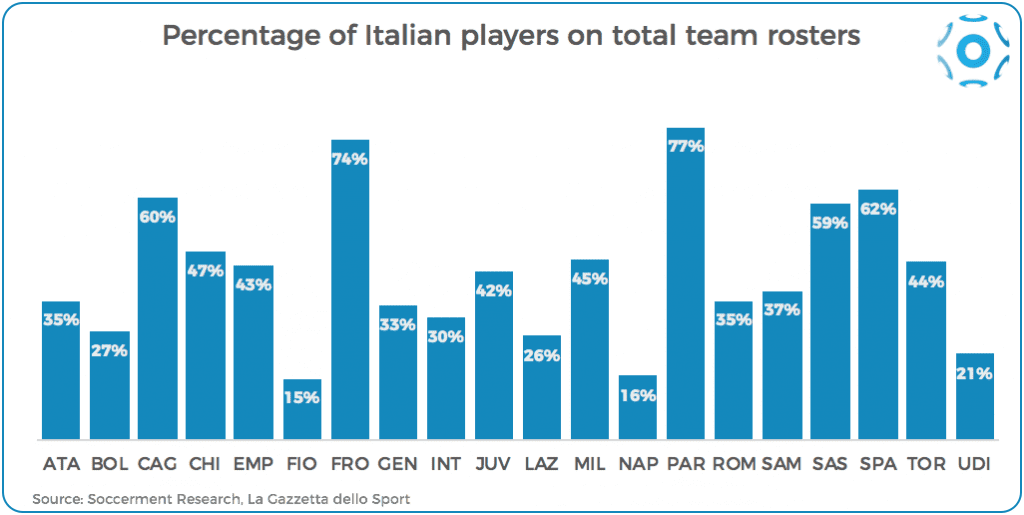 Chart 10: Share of Italian players on total, by team

We calculate that, on average, Italian players make €400k less per year than the foreign players, in the Italian Serie A: Italians earn €0.8m while foreigners €1.2m, net of taxes.

In our view, this is due to three factors:

1) in the sample there are many young Italian players, who rose from the teams’ youth teams and often earn less than €100k per year;

2) many of the expensive foreign players are attacking midfielders and forwards, who earn more, on average, as we show in chart 8;

3) as they say, nemo propheta in patria: to exclude the salary-tails dictated by age, we selected the players who are between 23 and 29 year-old. We were left with 108 Italians earning €875k and 158 foreigners earning €1.2m on average. It must be noted that the subgroup of Italians is composed as follows: 14% goalkeepers, 34% defenders, 24% midfielders; 28% forwards; while the subgroup of foreigners, as follows: 6% goalkeepers, 39% defenders, 34% midfielders and 21% forwards. By applying the total average salaries to the two breakdowns, we conclude that the subgroups’ composition by role does not fully justify the wage disparity. By the end of the Serie A, we will be able to tell the reader if the wage disparity is at least justified by the players’ performances.

The top-5 Italian earners in the Serie A are:

The career of the “median” player in the Italian Serie A

In order to understand what a player could expect to earn over a career in the Italian Serie A, we took the median net salary by age. Here we are not distinguishing by role, but it is straightforward to assume that a goalkeeper should expect to earn less than a forward, by looking at the numbers on chart 8 above.

For net salaries, the peak years are between 29 and 31 years of age, when the median player earn around €1.1m net of taxes. Therefore, there seems to be a lag-effect with what are normally considered the peak years when it comes to top-performances (27-29). This could indicate that football teams (at least in the Serie A) normally reward a player for his recent performances, not including forward-looking considerations.

Winning the ‘€11m lottery’ is far from easy though. The players of the top-5 European leagues are 0.00085% of all the people playing football in the World (according to FIFA numbers), or 0.005% of the players registered in the various federations. 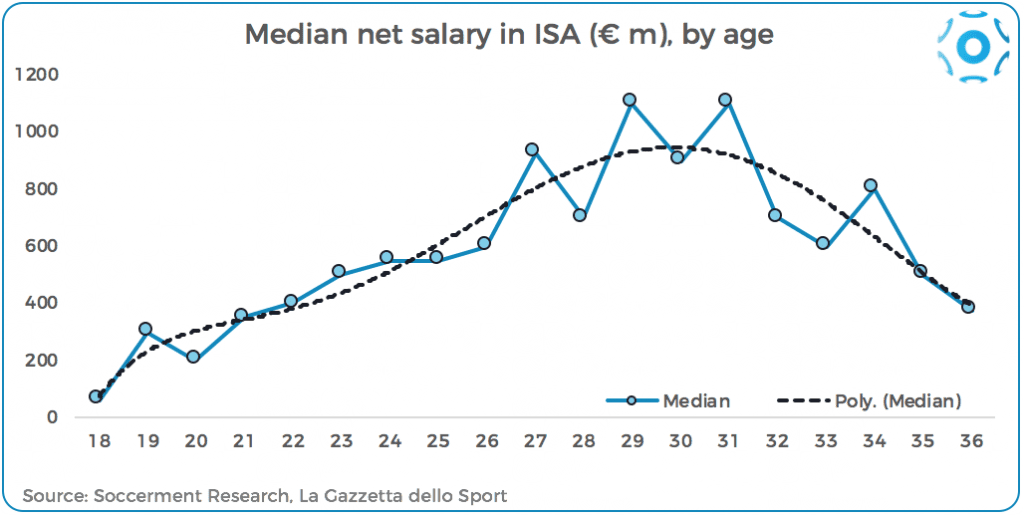 Chart 11: Median salaries in the Italian Serie A, by age

Looking at the salary budgets, is there any serious “Anti-Juve”?

In the past few years, the domestic supremacy of Juventus has been really staggering (7 victories in the past 7 years). We believe that it will be, again, very hard for anyone else to become a contender, especially in light of Juventus’s supremacy when it comes to their spending capability (see chart 4 above).

The Italian media are trying hard to find a team which will able to compete against them for the Scudetto. Before the start of the season, Inter Milan were considered as the main contenders but, after the first two unconvincing matches, such idea (or hope?) was basically scrapped.

Last year, Napoli were really close to win the Scudetto, despite displaying a much lower salary budget compared to Juve. We believe this was due to an almost perfect set of synergies, which depended on having had, for three years, more or less the same group of players, under a special coach such as Maurizio Sarri, now at Chelsea.

In the following chart, we display the Italian Serie A’s correlation between wage budget and the final number of points in the league last year (R-squared of 72%). We highlight Sarri’s Napoli, because of their outperformance. 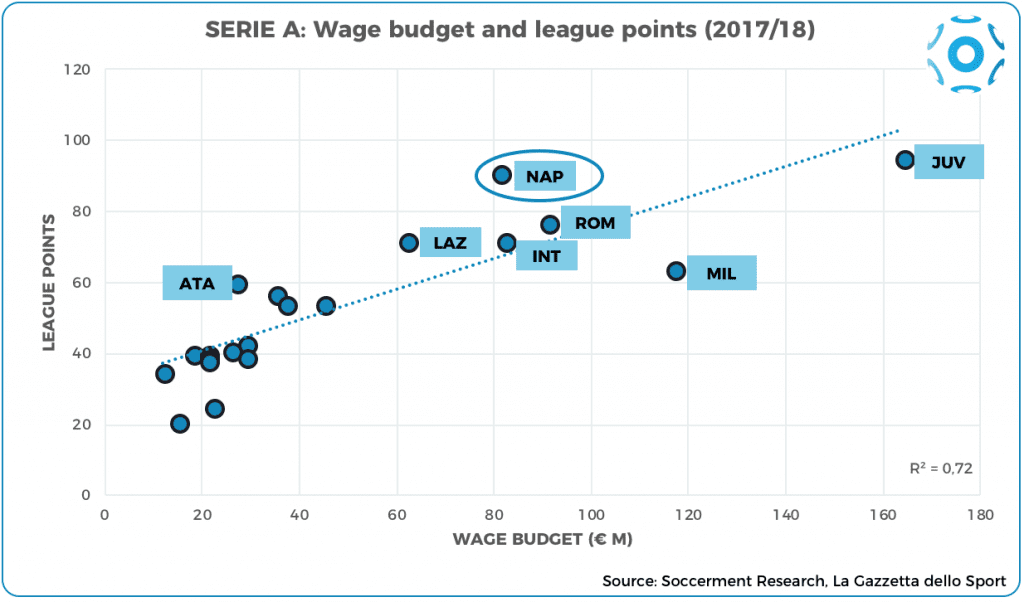 Our best-guess for the anti-Juve? We would probably go with AC Milan. They have the second-highest amount of total salaries, a top-class forward (Gonzalo Higuain), a clear tactical philosophy under Gattuso (a possession-based 4-3-3) and this year they won’t be subject to the off-pitch speculation regarding the club’s ownership (which should explain some, if not most, of the underperformance last year).